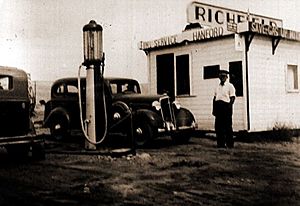 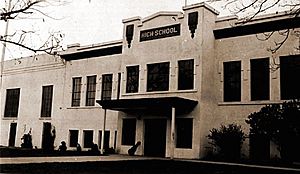 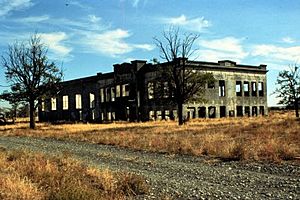 Hanford High School, following its use for military training

Hanford was a small agricultural community in Benton County, Washington, United States. It was depopulated in 1943 along with the town of White Bluffs in order to make room for the nuclear production facility known as the Hanford Site. The town was located in what is now the "100F" sector of the site.

The original town, named for the judge and irrigation company president Cornelius Hanford, was settled in 1907 on land bought by the local power and water utility. In 1913, the town had a spur railroad link to the transcontinental Chicago, Milwaukee and St. Paul Railway, also known as "the electric railroad". By 1925 the town was booming thanks to high agricultural demand, and it boasted a hotel, bank, and its own elementary and high schools.

The town was condemned by the Federal government to make way for the Hanford site. Residents were given a thirty-day eviction notice on March 9, 1943. Most buildings were destroyed, with the notable exception of the high school. It was used during World War II as the construction management office.

The former Hanford High School still stands today, marred by its use during the years for SWAT practice, and can be seen from the Hanford tour bus operated by the U.S. government. It is now protected as part of the Manhattan Project National Historical Park.

All content from Kiddle encyclopedia articles (including the article images and facts) can be freely used under Attribution-ShareAlike license, unless stated otherwise. Cite this article:
Hanford, Washington Facts for Kids. Kiddle Encyclopedia.