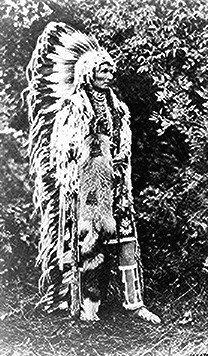 Umapine (pronounced U-mah-pine) is a census-designated place and unincorporated community in Umatilla County, Oregon, United States, two miles from the Oregon-Washington border. It has a population of 315 people as of 2010. The community is part of the Pendleton–Hermiston Micropolitan Statistical Area. It was established as a railroad stop on the Walla Walla Valley Railway with an active lumber yard and large population of dairies in the early 1900s. The current economy is supported by agriculture, including wheat and hay farms, apple orchards, and an increasing number of vineyards. The main establishments in the town are Umapine Market and the Waterhole Tavern.

Umapine was originally named Vincent, Oregon, until the community acted to get its own post office. Since there was already a post office by that same name in Wallowa County, the place was renamed for a prominent Indian chief who had once lived in the area, Chief Umapine, who was either of the Cayuse or Umatilla people. The post office was established in June 1916. After several fires in the post office building, Umapine post office, ZIP code 97881, was closed in December 1966. Umapine now has a Milton-Freewater mailing address, whose ZIP code is 97862.

For several decades the town had a school that served kindergarten through twelfth grade and whose mascot was the Umapine Chiefs. The enrollment at the school averaged 100 students. The school closed and incorporated with nearby Ferndale School District in 1984, which later incorporated with Milton-Freewater Unified School District in the early 1990s. In the early 1990s, the 1911 school building was sold to a local artist who established a fine art bronze foundry, Old School Bronze (formerly Northwest Art Casting), that is still in existence.

All content from Kiddle encyclopedia articles (including the article images and facts) can be freely used under Attribution-ShareAlike license, unless stated otherwise. Cite this article:
Umapine, Oregon Facts for Kids. Kiddle Encyclopedia.