Milton-Freewater is a city in Umatilla County, Oregon, United States. The city received its current name in 1951 when the neighboring rival cities of Milton and Freewater voted to merge. The population was 7,151 at the 2020 census. It is part of the Pendleton–Hermiston Micropolitan Statistical Area. Milton-Freewater is home to a growing wine industry.

First settled in 1868, the community was incorporated as Milton by 1873. It is uncertain how the name was chosen; perhaps in hopes of building a mill, perhaps in honor of English poet John Milton.

Freewater received its name from the offer of free residential water rights to attract new settlers. Before that name was chosen other proposed names had been New Walla Walla and Wallaette. The town was located to the north of and directly adjacent to Milton.

In the 1960s, Milton-Freewater billed itself as the pea capital of the world. There were several pea canneries in town. It held an annual festival and parade in May, known as the "Pea Festival". In the late 1970s, agricultural practices and crop prices changed the dynamics of the local economy, and peas were no longer grown as abundantly as they previously had been. One by one the canneries closed down. The town dropped the title and the festival. At the time, Milton-Freewater had a popular August event called the "Corn Roast" (started by local resident Thomas Dodd when he was Chamber President in the early 1970s), and the decision was made to increase the festival to a weekend-long celebration which, in 1981, became known as the Muddy Frogwater Festival (the city had sometimes been referred to as Muddy-Frogwater). The festival is now a three-day event held the third weekend in August each year. Festival activities have included frog-jumping contests, concerts, karaoke competitions, the corn roast, and a dance. The Friends of the Library have held a large outdoor book sale at the festival each year since 1993. On the Sunday morning of the festival there is an outdoor interdenominational church service. The city also has sponsored the creation of more than 50 chainsaw sculpture frogs at local businesses to help market itself as a "fun town" with a quirky nickname.

According to the United States Census Bureau, the city has a total area of 1.99 square miles (5.15 km2), all of it land.

Milton-Freewater has a steppe climate (BSk) according to the Köppen climate classification system.

The Milton-Freewater area is renowned for its wine. Until February 2015, it was part of the Walla Walla Valley AVA, when The Rocks District of Milton–Freewater American Viticultural Area (The Rocks AVA) was established. 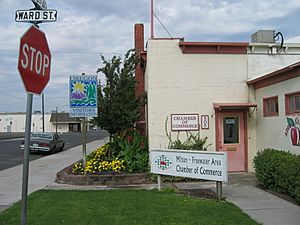 All content from Kiddle encyclopedia articles (including the article images and facts) can be freely used under Attribution-ShareAlike license, unless stated otherwise. Cite this article:
Milton-Freewater, Oregon Facts for Kids. Kiddle Encyclopedia.