The Rocks District of Milton-Freewater AVA facts for kids 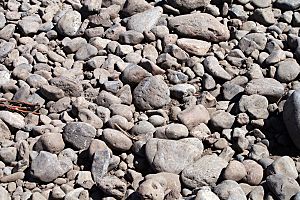 It is named for the city of Milton-Freewater, Oregon, and a unique alluvial fan resulting in rocky soils with "baseball sized" basalt cobbles covering the earth, and is notable as being "the only AVA in the United States whose boundaries are defined by the soil type". Unique wine flavors are said to result from the mineral composition, hydrology, and temperatures of the volcanic rocks.

Washington State geologist and terroir consultant Kevin Pogue submitted the proposal for the new AVA to the U.S. government. The AVA was published for comment in the Federal Register in February 2014, and was established in February 2015.

All content from Kiddle encyclopedia articles (including the article images and facts) can be freely used under Attribution-ShareAlike license, unless stated otherwise. Cite this article:
The Rocks District of Milton-Freewater AVA Facts for Kids. Kiddle Encyclopedia.