Kids Encyclopedia Facts
This page is about the town in the South Island, New Zealand. For the district, see Waimate District. For the Waimate Mission Station in the North Island, see Te Waimate mission.

Waimate is a town in Canterbury, New Zealand and the seat of Waimate District. It is situated just inland from the eastern coast of the South Island. The town is reached via a short detour west when travelling on State Highway One, the main North/South road. Waimate is 45.7 km south of Timaru, Canterbury's second city, 20 km north of the Waitaki River, which forms the border between Canterbury and the Otago province to the south and 47.5 km north of Oamaru, the main town of the Waitaki District.

The population of the Waimate District was recorded in the 2006 census as 7,206 people. The district's area of 3,582.19 square kilometres forms the southern section of the agriculturally rich Canterbury Plains.

Waimate is well known for its population of Bennett's wallabies. These marsupials were introduced from Australia and now live wild in the countryside surrounding the town. It is also recognised for the White Horse Monument which is a silhouette of a white horse that can be seen on the hills behind the town. It commemorates the Clydesdale horses that helped breaking in the land in earlier days. Visitors to the monument's lookout are rewarded with panoramic views of the town and the district's green plains out towards the Pacific Ocean.

From 1877 until 1966, Waimate was served by the Waimate Branch, a branch line railway that connected with the Main South Line some seven kilometres east in Studholme. For roughly seventy years ending in 1953, the line ran beyond Waimate to Waihao Downs. When the branch line was closed on 31 March 1966, Waimate became the first major town in New Zealand to lose its railway connection.

The Waimate District is bounded by the Waitaki River in the south, the Pareora River in the north and the Hakataramea Valley to the west. The district is a very productive agricultural area with a mix of pastoral, cropping, dairy farming, fruit and vegetable growing.

The Waihao River, which starts in the Hunter Hills catchment area runs eastwards on the southern side of the Waimate township joining with the Waimate Creek. They both eventually end up discharging very close to the sea into the Wainono Dead Arm, which then flows into the Wainono Lagoon near Studholme.

Panorama of the view from the White Horse overlooking Waimate township.

Just off the main street is a statue of Zealandia a female allegorical representation of New Zealand in much the same way as Britannia represents Great Britain. Only two Zealandia statues exist in the whole country; the other is at Palmerston, Otago. Both were erected as Boer War memorials.

Like much of rural New Zealand, Waimate suffered from an economic downturn in the 1980s, with the closure of the dairy factory and a number of sawmills. For the last decade of the 20th century the biggest employers in the district were two furniture manufacturers, a vegetable processing plant and a factory making French fries and other potato products at Makikihi. All but the latter closed within the first few years of the 21st century. However, a newly developed large scale sawmill and the development of a large milk powder factory, coupled with the wealth of dairy farms and the nationwide real estate bubble of 2003-2007, saw a renewed confidence in Waimate. 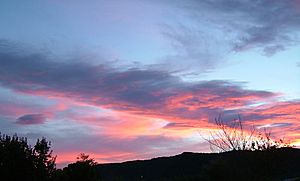 Photo of a sunset over the hills to the south of Waimate, taken from near the town centre.

All content from Kiddle encyclopedia articles (including the article images and facts) can be freely used under Attribution-ShareAlike license, unless stated otherwise. Cite this article:
Waimate Facts for Kids. Kiddle Encyclopedia.