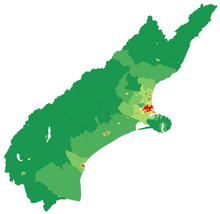 The region in its current form was established in 1989 during nationwide local government reforms. The Kaikoura District joined the region in 1992 following the abolition of the Nelson-Marlborough Regional Council.

Christchurch, the South Island's largest city and the country's third-largest urban area, is the seat of the region and home to 65 percent of the region's population. Other major towns and cities include Timaru, Ashburton, Rangiora and Rolleston.

In 1848, Edward Gibbon Wakefield, a Briton, and John Robert Godley, an Anglo-Irish aristocrat, founded the Canterbury Association to establish an Anglican colony in the South Island. The colony was based upon theories developed by Wakefield while in prison for eloping with a woman not-of-age. Due to ties to the prestigious Oxford University, the Canterbury Association succeeded in raising sufficient funds and recruiting middle-class and upper-class settlers. In April 1850, a preliminary group led by Godley landed at Port Cooper—modern-day Lyttelton Harbour—and established a port, housing and shops in preparation for the main body of settlers. In December 1850, the first wave of 750 settlers arrived at Lyttelton in a fleet of four ships.

Following 1850, the province's economy developed with the introduction of sheep farming. The Canterbury region's tussock plains in particular were suitable for extensive sheep farming. Since they were highly valued by settlers for their meat and wool, there were over half a million sheep in the region by the early 1850s. By the 1860s, this figure had risen to three million. During this period, the architect Benjamin Mountfort designed many civic and ecclesiastical buildings in the Gothic Revival style.

The Canterbury Province was formed in 1853 following the passing of the New Zealand Constitution Act 1852. It was formed from part of New Munster Province and covered the middle part of the South Island, stretching from the east coast to the west coast. The province was abolished, along with other provinces of New Zealand, when the Abolition of the Provinces Act came into force on 1 Nov 1876. The modern Canterbury Region has slightly different boundaries, particularly in the north, where it includes some districts from the old Nelson Province.

The area administered by the Canterbury Regional Council consists of all the river catchments on the east coast of the South Island from that of the Clarence River, north of Kaikoura, to that of the Waitaki River, in South Canterbury. It is New Zealand's largest region by area, with an area of 45,346 km2.

The median age of Canterbury's population is 39.9 years, two years above the New Zealand median. Around 15.5 percent of the population is aged 65 or over while 18.7 percent is aged under 15. There are 97.5 males for every hundred females in Canterbury.

At the 2013 Census of Population and Dwellings, 86.9 percent of Cantabrians identified as of European ethnicity, 8.1 percent as Māori, 6.9 percent as Asian, 2.5 percent as Pacific Peoples, 0.8 percent as Middle Eastern/Latin American/African, and 2.0 percent as another ethnicity (mainly 'New Zealander'). 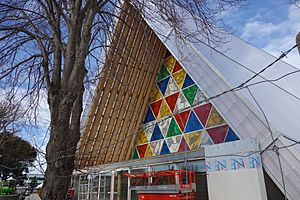 The Cardboard Cathedral in Christchurch opened in August 2013 as the transitional pro-cathedral for the Anglican Diocese of Christchurch. Anglicans make up 14.8 percent of Canterbury's population.

State Highway 1 runs the length of Canterbury, connecting north to Blenheim and the Cook Strait ferry terminal at Picton and south to Oamaru, Dunedin and Invercargill.

Christchurch International Airport, located in Harewood on the northwester outskirts of Christchurch, is the region's main airport. Regular flights operate from Christchurch to most major centres in New Zealand, as well as Australia, the Pacific Islands and eastern Asia. Timaru's Richard Pearse Airport serves South Canterbury with daily flights to Wellington.

All content from Kiddle encyclopedia articles (including the article images and facts) can be freely used under Attribution-ShareAlike license, unless stated otherwise. Cite this article:
Canterbury, New Zealand Facts for Kids. Kiddle Encyclopedia.