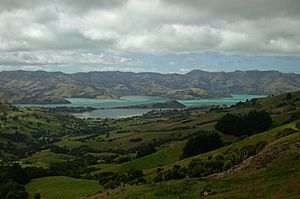 View of Akaroa harbour. The long, thin peninsula extending out into the harbour is Ōnawe Peninsula, and the middle of the volcano.

Akaroa is a small town on Banks Peninsula in the Canterbury region of the South Island of New Zealand, situated within a harbour of the same name. The name Akaroa is Kāi Tahu Māori for "Long Harbour", which would be spelled "Whangaroa" in standard Māori.

It is set on sheltered harbour and is overlooked and surrounded by the remnants of a miocene volcano. Akaroa is a popular resort town and in summer the temporary population can reach 15,000

Many Hector's dolphins may be found within Akaroa harbour, and 'swim with the dolphins' boat tours are a major tourist attraction. 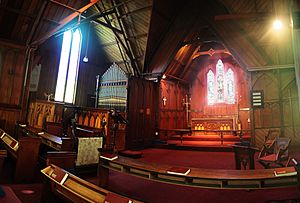 In 1830 the Māori settlement at Takapuneke, just east of the current town of Akaroa, became the scene of a notorious incident. The Captain of the British brig Elizabeth, John Stewart, helped North Island Ngāti Toa chief, Te Rauparaha, to capture the local Kāi Tahu chief, Tāmaiharanui, his wife Te Whe and his young daughter, Roimata. The settlement of Takapuneke was sacked. Concern over the complicity of John Stewart, amongst other lawlessness among Europeans in New Zealand, led to the appointment of an official British Resident James Busby to New Zealand in 1832 – the first step in the British involvement that led to the Treaty of Waitangi.

In 1832 Te Rauparaha, fresh from his successful three-month siege of Kaiapoi, took the pā on the Ōnawe Peninsula at the head of Akaroa Harbour.

After being informed of the French intent to colonise Akaroa and use further as a whaling port, the English ship Britomart was despatched in order to proclaim sovereignty for the Crown. The Britomart arrived in Akaroa on 16 August (although the captain's log shows this arrival date as 11 August 1840), Captain Stanley raised the British flag and held a court at each of the occupied settlements.

James Robinson Clough, also known as Jimmy Robinson, had arrived at Akaroa several years before. He acted as interpreter for Captain Owen Stanley at the flag-raising of 1840, and was the first Pākehā to travel up the Avon River in 1843. Clough's descendants are still prominent on the Peninsula today.

The following English immigrants settled in both Akaroa and German Bay (Takamatua) along with many German farmers who set up dairy, sheep and cocksfoot (Dactylis glomerata) farms. The great majority of the artifacts currently held at Akaroa Museum are of the early farming community and their lifestyle of the time. 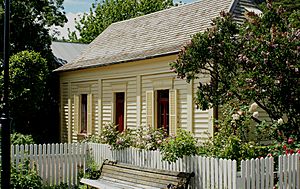 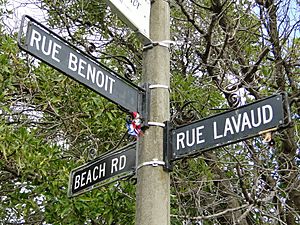 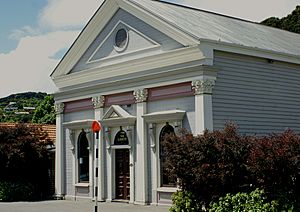 In 1838 Captain Jean François Langlois made a provisional purchase of land in "the greater Banks Peninsula" from Tuaanau. A deposit of commodities in the value of £6 was paid and a further £234 worth of commodities was to be paid at a later period. On his return to France, he advertised for settlers to come to New Zealand and ceded his interest in the land to the Nanto-Bordelaise Company, of which he became a part owner. On 9 March 1840, 63 emigrants left from Rochefort. The settlers embarked on the Comte de Paris – an old man-of-war ship given to them by the French government – for New Zealand. The Comte de Paris and its companion ship the Aube, captained by Commodore Charles François Lavaud, arrived in the Bay of Islands in the North Island on 11 July 1840, where they discovered that the Banks Peninsula had been claimed by the British. The French arrived in Akaroa on 18 August and established a settlement.

The area still has a French influence, reflected in many local placenames.

Before 1840, the area of the current Akaroa town was also known as Wangaloa, and the subsequent French settlement was known as Port Louis-Philippe, named after the French king of the time.

All content from Kiddle encyclopedia articles (including the article images and facts) can be freely used under Attribution-ShareAlike license, unless stated otherwise. Cite this article:
Akaroa Facts for Kids. Kiddle Encyclopedia.