Lyttelton (Māori: Ōhinehou) is a port town on the north shore of Lyttelton Harbour, at the north-western end of Banks Peninsula and close to Christchurch, on the eastern coast of the South Island of New Zealand.

Due to its establishment as a landing point for Christchurch-bound seafarers, Lyttelton has historically been regarded as the "Gateway to Canterbury" for colonial settlers. The port remains a regular destination for cruise liners and is the South Island's principal goods transport terminal, handling 34% of exports and 61% of imports by value.

In 2009 Lyttelton was awarded Category I Historic Area status by the New Zealand Historic Places Trust (NZHPT) defined as "an area of special or outstanding historical or cultural heritage significance or value".

According to the 2013 census, the usual resident population of Lyttelton, including neighbouring communities of Rapaki, Cass Bay and Corsair Bay, was 2,859.

Lyttelton is the largest settlement on Lyttelton Harbour, an inlet on the north-western side of Banks Peninsula extending 18 km inland from the southern end of Pegasus Bay. The town is situated on the lower slopes of the Port Hills, which form the northern side of the harbour and effectively separate Lyttelton from the city of Christchurch. This steep-sided crater rim acts as a natural amphitheatre and a boundary to urban development.

A tunnel through the Port Hills provides direct road access to Christchurch, 12 km to the north-west. The town of Sumner, some 6 km to the north-east, is accessed via Evans Pass. Another settlement at Governors Bay lies 10 km to the west and a ferry service connects the suburb of Diamond Harbour on the southern shore of the harbour.

The uninhabited Quail Island sits in the upper harbour southwest of Lyttelton. 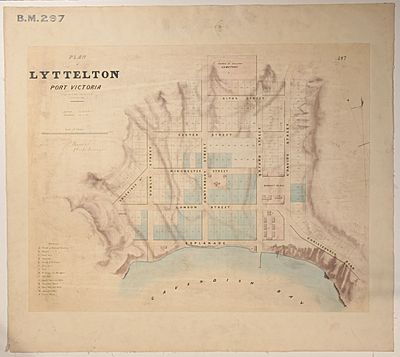 Black Map of Lyttelton from September 1849

A home for Māori for about 700 years, Lyttelton Harbour was discovered by European voyagers passing by on 16 February 1770 during the Endeavour's first voyage to New Zealand.

Aiming to establish a Church of England colony in New Zealand, the Canterbury Association was founded in 1848. As Lyttelton was a harbour, and had a large amount of flat land suitable for farming and development nearby, it was ideal for a colony. Joseph Thomas as the agent of the Canterbury Association and its chief surveyor was in charge of preparing the settlement for the settlers. He initially placed the port town at Rapaki and the settlement's capital, Christchurch, and the head of the harbour at present-day Teddington. But none of these initial ideas proved feasible, as Rapaki was not available, as it had been promised to Maori as a reserve, and required reclamation at the head of the harbour for the capital was estimated as too expensive. Early survey work in Lyttelton was done by Thomas and Charles Torlesse, but most of it until completion in September 1849 was done by Edward Jollie. In his diary, Jollie explains how the streets got their names:

The names of the streets of the three towns I surveyed were taken from Bishoprics and the way it was done was this; as soon as I completed the map I took it to Thomas who putting on his gold spectacles and opening his would read out a Bishop's name to hear if it sounded well. If I agreed with him that it did, I put the name to one of the streets requiring baptism. Lyttelton being the first born town got the best names for its streets, Sumner being next had the next best and Christchurch being the youngest had to be content with chiefly Irish and Colonial bishoprics as names for its streets. This accounts for, what to anyone not knowing the circumstances, appears strange, viz: that many of the best English Bishoprics are not represented [editorial note: not represented "in Christchurch"] while Irish and Colonial ones are.

In August 1849 it was officially proclaimed a port. Pilgrim's Rock shows the place where European settlers first set foot in the harbour. The present location of the rock is well inland from the sea, as much of Lyttelton's dockside has been reclaimed from the harbour waters in recent years.

Lyttelton was formerly called Port Cooper (after Daniel Cooper) and Port Victoria. It was the original settlement in the district (1850). The name Lyttelton was given to it in honour of George William Lyttelton of the Canterbury Association, which had led the colonisation of the area.

The Lyttelton Times was one of the principal newspapers of the Canterbury region for 80 years, published from 1851 until 1929, at which time it became the Christchurch Times, until publication ceased in 1935.

On 1 July 1862, the first telegraph transmission in New Zealand was made from Lyttelton Post Office.

In 1870, fire destroyed all the wooden buildings in Norwich Quay, on the main street of Lyttelton.

The Lyttelton Timeball Station was erected in 1876 and started signalling Greenwich Mean Time to ships in the harbour that year. It was one of the world's five working timeball stations until it was destroyed by the June 2011 Christchurch earthquake. The castle-like building was located high on a ridge above the port with extensive views over the harbour.

On 1 January 1908, the Nimrod Expedition, headed by Ernest Shackleton to explore Antarctica left from the harbour here. 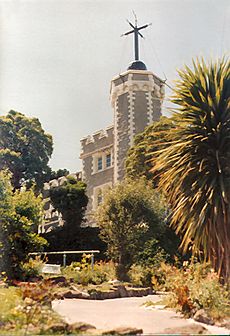 The 2010 Canterbury earthquake damaged some of Lyttelton's historic buildings, including the Timeball Station. There was some damage to the town's infrastructure, but the port facilities and tunnel quickly returned to operation. The overall quake damage was less significant than in Christchurch itself, due to the dampening effects of the solid rock that the town rests on and its moderate distance from the epicentre.

On 22 February 2011 a magnitude 6.3 aftershock caused much more widespread damage in Lyttelton than its predecessor due to its proximity to Lyttelton and a shallow depth of 5 kilometres (3.1 mi). Some walls of the Timeball Station collapsed and there was extensive damage to residential and commercial property, leading to the demolition of a number of high-profile heritage buildings such as the Harbour Light Theatre and the Empire Hotel. Many other unreinforced masonry buildings were severely damaged.

Following the February earthquake it was suggested that the Timeball Station be dismantled for safety reasons. Bruce Chapman, chief executive of the New Zealand Historic Places Trust (NZHPT) said there was a possibility that it may be reconstructed. "If we can find a way to dismantle the Timeball Station that allows us to retain as much of the building's materials as possible, we will do so." However, on Monday 13 June 2011 a further 6.3 ML aftershock brought down the tower and remaining walls while workmen were preparing to dismantle it.

Much of Lyttelton's architectural heritage was lost as a result of the earthquakes, as damage was deemed too extensive for reconstruction. By June 2011, six buildings in London Street in Lyttelton had been demolished, along with another four on Norwich Quay. The town's oldest churches have collapsed, including Canterbury's oldest stone church, the Holy Trinity.

Lyttelton has long been the main port of the Canterbury / Christchurch area, having been opened in 1877 by the Lyttelton Harbour Board, later becoming the Lyttelton Port Company with the introduction of the Port Companies Act in 1988.

Between 1958 and 1967 the port saw such prosperity that Kaiapoi, on the coast north of Christchurch, briefly reopened its closed port facilities for a decade, to allow smaller ships to bypass the congested Lyttelton wharves.

In the 1970s the port was chosen as one of the main ports in the South Island to be dredged and upgraded for containerisation, with the container facility opening in 1977, the centenary of the initial opening.

Substantial quantities of South Island coal have been shipped from this port for the past 100 years. The port facilities have provided for LP gas and petrol for the past 50 years. In essence the port could be viewed (based on quantities of materials shipped in or out) as the primary port for energy shipments in the South Island.

Lyttelton was the location for most of the exterior scenes in Peter Jackson's 1996 horror movie The Frighteners.

All content from Kiddle encyclopedia articles (including the article images and facts) can be freely used under Attribution-ShareAlike license, unless stated otherwise. Cite this article:
Lyttelton, New Zealand Facts for Kids. Kiddle Encyclopedia.