Diamond Harbour is a small settlement on Banks Peninsula, in Canterbury, New Zealand. It is on the peninsula's northern coast, on the southern shores of Lyttelton Harbour, and is administratively part of the city of Christchurch.

The area was named by Mark Stoddart, who bought 500 acres (200 ha) of land in the area in 1856. The name is applied not only to Diamond Harbour proper but to the nearby settlements of Church Bay, Charteris Bay, and Purau. In the 2006 census, this area had a population of slightly under 1,400. 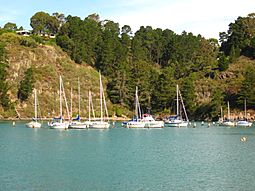 Until 2012 Godley House, built in 1880 by Harvey Hawkins on land purchased from Stoddart, was still standing. However, it was critically damaged in the 2011 earthquake and has since been demolished. Stoddart Cottage, built for Stoddart's wedding in 1862, is the oldest building still standing, and was registered by the New Zealand Historic Places Trust as a Category I historic building in 1990. The artist Margaret Stoddart grew up in the cottage.

The centre of the village has two cafes, a library, community hall, medical centre and a small post office, all overlooking the village cricket pitch.

All content from Kiddle encyclopedia articles (including the article images and facts) can be freely used under Attribution-ShareAlike license, unless stated otherwise. Cite this article:
Diamond Harbour, New Zealand Facts for Kids. Kiddle Encyclopedia.