The June quake was preceded by a magnitude 5.9 ML tremor that struck the region at a slightly deeper 8.9 km (5.5 mi). The United States Geological Survey reported a magnitude of 6.0 Mw at a depth of about 9 km (5.6 mi).

The earthquake produced severe shaking that registered VIII on the Mercalli scale in and around the city of Christchurch, destroying some buildings and causing additional damage to many structures affected by previous earthquakes. The damaged tower of the historic Lyttelton Timeball Station collapsed before dismantling work could be completed. Rebuilding costs in Christchurch increased by NZ$6 billion (US$4.8 billion) owing to the additional damage from the quake.

The earthquake and its pre-tremor struck during the afternoon near an extremely populated area, with most buildings in the area already left in unstable conditions by previous earthquakes. It affected roughly 400,000 people directly, most of whom were estimated to have experienced at least strong shaking. Hospital officials confirmed at least 46 injuries after its occurrence; falling debris struck several people, while two others were left in critical condition. In the city centre, two workers had to be rescued from a collapsed church and were promptly hospitalised. The morning after, officials confirmed an elderly man had died after falling and being knocked unconscious in a rest home when the earthquake struck. Mass casualties were avoided owing to a combination of building evacuations prompted by the weaker shock. 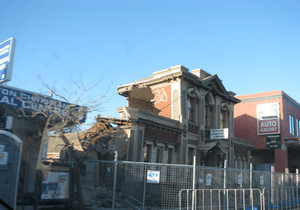 Structural damage from the earthquake

In the wake of the earthquake, multiple phone lines were down, and scattered power outages affected about 54,000 households. Moreover, at least 70 underground 11,000 volt cables sustained some degree of damage, contributing to the outages. The shaking ruptured local water mains, resulting in widespread flooding that affected several streets. Furthermore, officials ordered the closure of bridges in the area as a precautionary measure; one bridge was reported to have collapsed to the strong ground motions. Days after its occurrence, there were ongoing aftershocks.

Strong ground motions caused many secondary effects, including gas leaks and widespread soil liquefaction. Consequently, sand boils emerged from asphalt roads, toppling a few cars and sinking another. Several houses in the hill suburbs of Sumner and Redcliffs were affected by falling boulders from hillsides. Following its occurrence, much of Christchurch lost water pressure; residents were thus urged to conserve water use. In some parts of the Heathcote Valley springs surfaced as a consequence of the sudden rise in the water table, flooding some properties.

Though the exact extent of losses was unclear, the earthquake caused further damage to many structures in Christchurch; approximately half of the buildings in the centre of the city were already damaged or destroyed by previous strong earthquakes. Assessments indicate over 100 additional buildings were rendered beyond repair in the area. Despite its moderate magnitude, the preceding magnitude 5.6 ML tremor caused several two-story buildings at a road intersection in the city to collapse. Multiple hospitals and residential care facilities in Christchurch were left without essential services, and some reported considerable damage to infrastructure.

All content from Kiddle encyclopedia articles (including the article images and facts) can be freely used under Attribution-ShareAlike license, unless stated otherwise. Cite this article:
June 2011 Christchurch earthquake Facts for Kids. Kiddle Encyclopedia.