In the 2006 census, the population of the town was 10,200, with a further 1,700 residents in the surrounding area. This represents a growth rate of 11% over the previous five years.

Kaiapoi suffered extensive damage in the 2010 Canterbury and also the February 2011 Christchurch earthquakes, which rendered many homes uninhabitable and businesses inoperable.

Kaiapoi takes its name from the Māori pā (fortified village) which was built just north of the site of the current town around the year 1700 by the Ngāi Tahu chief Turakautahi. Eventually to become the largest fortified village in the South Island it lay on the site of a stronghold of an earlier tribe, Waitaha whose history and traditions Ngāi Tahu eventually adopted. Tūrākautahi was the second son of Tūāhuriri, consequently Ngāi Tūāhuriri is the name of the hapu (subtribe) of this area. In selecting the pā site, Tūrākautahi determined that kai (food/resources) would need to be poi (swung in) from other places hence the name Kaiapoi which it is said can be translated as a metaphor for "economics". All manner of resources were transported along the waterways of the Rakahuri and Taerutu on their way to or from Kaiapoi, Pounamu from the Arahura river, Titi (muttonbird) from the islands around Stewart Island / Rakiura or Tūhua (obsidian) from Mayor Island / Tuhua and other resources all indicative of a sophisticated trading network between North and South Island tribes.

Kaiapoi has many facilities and parks for sport and recreation. On the town border is Woodford Glen Speedway, the National Scout headquarters, and the Cure Rowing Club. Kaiapoi is represented by both Rugby codes. The Kaiapoi Rugby Club has its home ground at Kaiapoi Park, and the Northern Bulldogs, who play in the local Canterbury Rugby League have theirs at Murphy Park on the banks of the Kaiapoi River. The Kaiapoi Bulldogs won their first Premiership title in 2007, the club's Jubilee 50th season.

Kaiapoi also boasts the furniture makers Blakeley's (of Kaiapoi), Blackwell's Department Store (demolished after sustaining damage in the September 2010 earthquake), a band rotunda, which has been moved from its former location on the south bank of the river, opposite the Kaiapoi Workingman's Club (where Sir Howard Morrison once performed), to the park opposite, by the red brick Kaiapoi Kindergarten. There is also the Doll's Hospital, Kaiapoi Borough, Kaiapoi North, and Kaiapoi High schools, the berth of the MV Tuhoe, which is more than one hundred years old, and the fact that former Prime Minister Norman Eric Kirk was the mayor of Kaiapoi.

Children used to be born here at the Kaiapoi Home, in Cass Street, opposite the public swimming pool. The oldest church in Canterbury, known as St. Bartholomew's, is here, as well as one large white wooden house, right round the corner from it, in Sewell Street, which used to be the Presbyterian Manse. 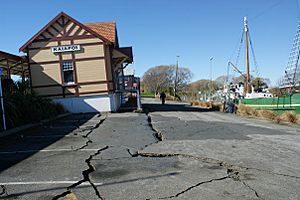 State Highway 1 bypasses the town to the west via the Christchurch Northern Motorway. Prior to the completion of the motorway in 1967, State Highway 1 ran down the main street of Kaiapoi. A half-hourly bus service connects Kaiapoi to Rangiora and central Christchurch.

The Main North Line railway runs through Kaiapoi, and the town once served as the junction for the Eyreton Branch, which provided rail access to communities west of Kaiapoi such as West Eyreton (though it ran to the north of Eyreton itself). This branch line opened in 1875 and closed fully by April 1965. The old station has a NZHPT Category II listing.

The river used to have a port before the construction of the Waimakariri River bridge, and was an important point for the transport of goods to and from Christchurch. Bucking the trend of river ports dying off in the middle of the 20th century, the port actually reopened for a decade between 1958 and 1967, to allow smaller ships to bypass the congested Lyttelton wharves.

At one stage, a walnut tree on one resident's property was so large, it was used to act as a landmark for pilots approaching Christchurch International Airport to get their bearings, before being cut down by the owner and his sons.

All content from Kiddle encyclopedia articles (including the article images and facts) can be freely used under Attribution-ShareAlike license, unless stated otherwise. Cite this article:
Kaiapoi Facts for Kids. Kiddle Encyclopedia.