The Main North Line, sometimes referred to as part of the South Island Main Trunk Railway, is a railway line that runs north from Christchurch in New Zealand up the east coast of the South Island through Kaikoura and Blenheim to Picton. It is a major link in New Zealand's national rail network and offers a connection with roll-on roll-off ferries from Picton to Wellington. It was also the longest railway construction project in New Zealand's history, with the first stages built in the 1870s and not completed until 1945.

The first proposal for a line resembling the present day Main North Line was made in 1861. A proposal for a line linking Christchurch and Blenheim was put before the Marlborough Provincial Council in April 1861. Later that year, the national government passed the Picton Railway Act in October, approving a line from Picton to the Wairau River under the auspices of the Marlborough Provincial Council. However, the political authorisation did not translate into actual construction and no work on building the line was undertaken in the 1860s. In the 1870s the Canterbury Provincial Railways began to extend their 1,600 mm (5 ft 3 in) broad gauge network north from Christchurch through Kaiapoi and Rangiora, reaching Amberley in 1876 and Waipara in 1880 - by this stage, the Canterbury network had been re-gauged to the national gauge of 1,067 mm (3 ft 6 in) narrow gauge and acquired by the central government. At the other end of the line, progress had been made in Marlborough, with a line opened between Blenheim and Picton. Nelson also sought a connection to the national network, possibly via an extension of the east coast main line or a branch line from it, and the first portion of the Nelson Section railway had opened in 1877.

In the 1880s, work ground to a halt as debate raged over what route to construct. An 1880 Royal Commission on the state of New Zealand's railways felt that an east coast main line would be premature, but possibly necessary in the future. Contrarily, regional actors in Canterbury, Marlborough, Nelson, and the West Coast argued passionately in favour of the proposals that best suited their interests. Canterbury slowly progressed its "Great Northern Railway" and pursued an inland route from Waipara, reaching Waikari in 1882, Medbury in 1884, and Culverden in 1886. Also in 1882, the Middle Island Railway Extension Commission ('Middle Island' then being the name for the South Island) was established to study proposals for a line northwards, including the following routes: 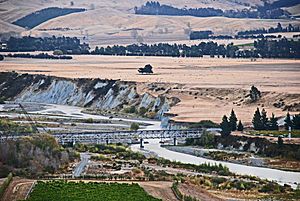 The Awatere River double-decker bridge, located near Seddon. The upper deck carries the railway and the lower deck carried State Highway 1 until October 2007.

Interests in Marlborough favoured the coastal proposal and began work on extending their railway south from Blenheim. Canterbury appeared indecisive on a route north; once Culverden was reached in 1886, it was treated as the terminus of the east coast main line, then after roughly 15 years of inactivity, work began on a coastal "branch" north from Waipara at the start of the 20th century. This reached Scargill in 1902, Ethelton in 1905, Domett in 1907, Cheviot in 1910 (the station was in nearby Mina), and in 1912 the line crossed the Waiau River with a 706 m long bridge and was opened to Parnassus. Over the next two years, work progressed from Parnassus up the Leader River valley, with roughly three kilometres of track laid, a few more kilometres of formation made, preliminary activity undertaken for a diversion of the Hookhamsnyvy Creek, and work commenced on a bridge across the Leader River. The line was envisaged to then follow a series of inland valleys (such as those of the Conway and Charwell Rivers) to Kaikoura. The outbreak of World War I led to a halt on construction and the track beyond Parnassus was removed. At the Marlborough end, the line was extended southward from Blenheim to reach Seddon in 1902 and Ward in 1911. The line reached Wharanui, 13 km (8.1 mi) south of Ward, before the onset of World War I saw construction halted.

Not all work was postponed by the war. A campaign to extend the line from Culverden to Waiau was successful and construction continued through the war, with the line opened to Waiau on 15 December 1919. This boosted the hopes of those seeking an inland route, and more work was undertaken, with 3 km of formation built for a line from Waiau to Kaikoura, but ultimately nothing came of this proposal and the terminus remained in Waiau. The 1920s saw little progress made on the Main North Line as various interest groups, governments, and expert reports contested to achieve their respective desired outcomes. At this stage, both the Leader Valley and Tophouse routes were still possibilities, but it was around this time that proposals of a route out of Parnassus in a more easterly direction than the Leader Valley began to be formulated. This became the present-day route.

In the late 1920s, construction finally recommenced on the coastal line south of Wharanui, but this soon stopped again when the Great Depression's effects began to be severely felt. Public pressure for a resumption of work was strong, and as the economy was starting to improve in 1936 the government issued orders for completion in four years. In 1939, the line beyond Parnassus was opened to Hundalee, but the outbreak of World War II created more delays and the goal of completion in four years was not achieved. Construction continued through the war, and not long after the resumption of peace the northern and southern railheads met in Kaikoura. The Main North Line from Christchurch to Picton was completed and officially opened on 15 December 1945. 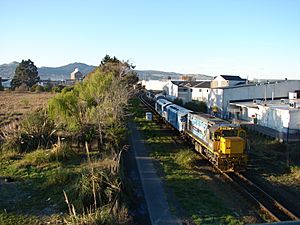 For a number of decades before the connection of the northern and southern ends, the Canterbury section was operated with its terminus in Culverden, even when the coastal route reached Parnassus. The most important passenger train was the Culverden Express, with carriages for Parnassus detached at Waipara. The express was supplemented by slower mixed trains. When the Waiau Branch reached Waiau in 1919 one goods train per day between Christchurch and Culverden was added to the schedule and the passenger train operated twice daily; these services continued to Waiau thrice weekly. The section of the Main North Line between Christchurch and Rangiora also saw commuter services and trains from the Oxford Branch and Eyreton Branch.

In the mid-1920s Parnassus became the primary terminus and the carriages detached in Waipara were conveyed to Culverden. During this period the train was used for trials of the 'Midland Red' paint scheme that came to be used nationwide for passenger carriages until the 1990s.

The scenic value of the route, especially through the Kaikoura area, led to the creation of the tourist-focused Coastal Pacific, an express passenger train that ran between Christchurch and Picton in 5 hours and 20 minutes. It began on 25 September 1988 and was later renamed as the TranzCoastal. In the summer of 1994/1995 this service was supplemented by the Lynx Express which ran to a faster timetable and was designed to connect with the Lynx fast ferry service in Picton. It was unsuccessful and did not operate in subsequent summers. The TranzCoastal was suspended as a result of the major Christchurch earthquake in February 2011 and did not resume until August that year, returning to the original Coastal Pacific name. The line was closed by major slips as a result of the 2016 Kaikoura earthquake with a freight train being left stranded north of Kaikoura. However the line reopened from Picton to the Lake Grassmere salt works on 16 January 2017.

All content from Kiddle encyclopedia articles (including the article images and facts) can be freely used under Attribution-ShareAlike license, unless stated otherwise. Cite this article:
Main North Line, New Zealand Facts for Kids. Kiddle Encyclopedia.