Cheviot is a town in the Hurunui District of north Canterbury, on the east coast of the South Island of New Zealand. It is on State Highway 1 approximately 110 kilometres (68 mi) north of Christchurch.

Cheviot is a service town for highway traffic and for a pastoral farming district that is currently predominant in sheep farming. Based in the township are a volunteer fire and ambulance services and one full-time police officer. Surrounding settlements include:

Domett (pronounced Do-mett), originally a railway town, is now only populated by farms and a petrol station, with the Old Main Road/Hurunui River Mouth Road junction. Next to this junction is the old Domett Railway Station, relocated as a cafe. Domett Service Station provides after-hours sale of fuel (with surcharge): most service stations in the area close around 6pm.

Spotswood has an old hall that is still used regularly, and mainly consists of farms around Waiau East Road.

Parnassus is slightly larger than the others but the local Parnassus School has recently shut down. The famous Waiau River road/rail bridge was here, before being abandoned and replaced with a new road bridge. Prior to the opening of the old bridge in the 1930s a ferry across the river carried goods north and south. The Waiau River ends not far away however access to the river mouth must be made over farm property with the owner's permission. On the State Highway north of Parnassus is Leader Road which leads to the townships of Waiau, Rotherham, Culverden and Hanmer Springs. 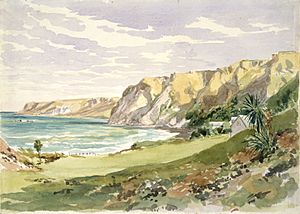 Gore Bay in 1874, with the house behind the cabbage tree belonging to Eliza Robinson

Gore Bay is a surfing beach with summer beach houses and 14 permanent residents. There are two local camping grounds, each with beach access and business. It is a popular New Year's Eve venue.

Of note is Cathedral Gully, a spectacular weathered clay canyon.

Once a prospering port, Port Robinson is now just a wreck. The old wharf may still be seen, but it is rather dangerous.

Stonyhurst is a farming station in the Blythe Valley, southwest of Cheviot.

It was founded in 1851 by Frederick Weld and Charles Clifford. He had gained his impression when walking from Lyttelton to Flaxbourne, in Marlborough. Clifford landed sheep on the beach just south of the Blythe River which was later be going to be known as Stonyhurst Station, named after Stonyhurst College in England where they were both educated.

The area is described by the local authority as "a potentially significant natural area", and the manager's cottage is a Category II protected building under the Historic Places Act.

All content from Kiddle encyclopedia articles (including the article images and facts) can be freely used under Attribution-ShareAlike license, unless stated otherwise. Cite this article:
Cheviot, New Zealand Facts for Kids. Kiddle Encyclopedia.