At the time of the 2006 New Zealand census of population and dwellings, the population of Amberley was 1302, an increase of almost 15% in the previous 5 years. Just under 30% of the population was aged over 65, significantly higher than the national average. In addition, more than 2,300 people lived in the rural areas serviced by the town or in adjacent villages such as Waipara and Leithfield. Ethnically, it has one of the lowest concentrations of non-European populations in New Zealand, with local council staff admitting the locals could identify the identities of all Maori and Asians recorded.

Amberley is the seat of the Hurunui District Council and the service centre for a district of arable and sheep farming. Once a year, the local A&P (Agricultural and Pastoral) show is held, usually mid-Spring. 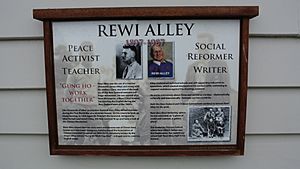 Amberley Primary School's Rewi Alley Community Centre has a memorial to Rewi Alley who attended there.

There is a statue in memory of Charles Upham just outside the council building. Upham farmed in the Cheviot area. Nearby the statue sit three limestone carvings, labelled The Grandmothers, which celebrate the ancient Waitaha people. Carved by Sculptor Warren Thompson, the statues were unveiled in May 2003 by the Rt. Hon. Helen Clark, Prime Minister of New Zealand. 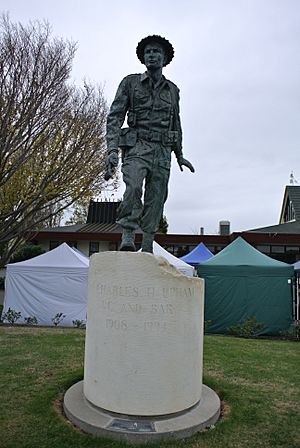 All content from Kiddle encyclopedia articles (including the article images and facts) can be freely used under Attribution-ShareAlike license, unless stated otherwise. Cite this article:
Amberley, New Zealand Facts for Kids. Kiddle Encyclopedia.