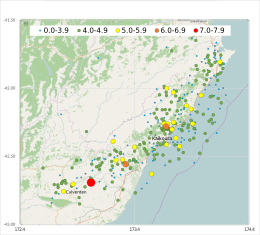 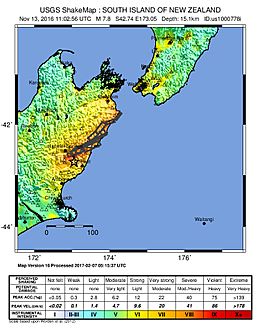 USGS ShakeMap for the event

The 2016 Kaikoura earthquake was a magnitude 7.8 (Mw) earthquake in the South Island of New Zealand that occurred two minutes after midnight on 14 November 2016 NZDT (11:02 on 13 November UTC). Ruptures occurred on multiple faults and the earthquake has been described as the "most complex earthquake ever studied".

The earthquake started at about 15 kilometres (9 mi) north-east of Culverden and 60 kilometres (37 mi) south-west of the tourist town of Kaikōura and at a depth of approximately 15 kilometres (9 mi). The complex sequence of ruptures lasted for about two minutes. The cumulative magnitude of the ruptures was 7.8, with the largest amount of that energy released far to the north of the epicentre.

Over $1.8 billion in insurance claims were received. There were two deaths, in Kaikōura and Mount Lyford. 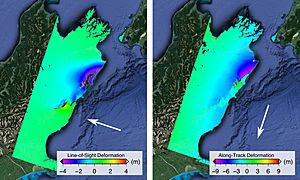 A complex sequence of ruptures with a combined magnitude of 7.8 started at 00:02:56 NZDT on 14 November 2016 and lasted approximately two minutes. The hypocentre (the point where the ruptures started) was at a depth of 15 kilometres (9 mi). The epicentre (the point on the Earth's surface above the hypocentre) was 15 kilometres (9 mi) north-east of Culverden and 95 km (59 mi) from Christchurch. From the hypocentre, ruptures ripped northwards at a speed of 2 km per second, over a distance of up to 200 km (124 mi). The largest amount of energy released did not occur at the epicentre, rather 100 km (62 mi) to the north near Seddon. Initial field surveys indicated ruptures on at least six faults, while more detailed studies confirmed ruptures on twenty-five faults. This is considered a world record for the greatest number of faults to rupture in a single earthquake event. The earthquake was assessed as the 'most complex earthquake ever studied' and prompted the reassessment of a number of assumptions about earthquake processes.

There was motion on the Kekerengu Fault of up to 10 m (33 ft), movement on the Hundalee Fault, a newly identified fault in Waipapa Bay, as well as minor motion on the Seaward segment of the Hope Fault, and rupture on the Humps Fault and in the Emu Plains area. The offshore continuation of the Kekerengu Fault to the north east, known as the Needles Fault, ruptured as well. NIWA marine geologist Dr Philip Barnes said the length of the Kekerengu–Needles Fault rupture may extend for about 70 km (43 mi), consisting of 36 km (22 mi) on land and 34 km (21 mi) under the sea.

The tsunami that followed the Kaikōura earthquake reached a peak height of about 7 metres. The tsunami was found to be highest at Goose Bay, with data indicating a maximum run-up height above tide level at the time of the tsunami of 6.9 m ± 0.3 m. At Oaro, the height was 5.3 m ± 0.3 m. Marine and freshwater flora and fauna were later found scattered across the Oaro River flood plain, extending 250 metres (820 ft) inland from the high tide mark on the day of the survey.

Immediately after the earthquake, the tide level at the Kaikōura tide gauge started dropping. Over 25 minutes, it dropped about 2.5 m, a classic warning sign of a tsunami. During the next 15 minutes, the water level rose from its lowest level by about 4 m. That was followed by a series of waves over several hours. The water level at the Kaikōura gauge rose 2.5 m higher than it would have been. This was made up of a 1.5 m rise measured on the gauge, and a rise of about 1 m of the gauge itself, as the seabed and surrounding land rose by that amount. Some other tide gauges that recorded the tsunami were in Wellington Harbour, Castlepoint, Christchurch, and the Chatham Islands.

A tsunami estimated at five metres high struck the north-facing Little Pigeon Bay on Banks Peninsula. The bay contained only one building, an unoccupied holiday house that was pushed off its foundations and heavily damaged. In neighbouring Pigeon Bay, the tsunami was observed at about 2 am but caused no damage.

Two people died in the earthquake. A man was crushed and died when the historic Elms Farm homestead near Kaikōura collapsed. Two other people were rescued from the rubble of the house, including the man's 100-year-old mother. A woman died in a log house that was damaged at Mount Lyford.

Many major roads were closed in the South Island because of slips and damage to bridges, including State Highway 1 between Picton and Waipara, and State Highway 7 between Waipara and Springs Junction (SH 65 turnoff). Most roads were cleared within 24 hours, but SH 1 between Seddon and Cheviot via Kaikōura and the Inland Kaikoura Road remained closed. The closure of SH1, the Inland Kaikoura Road and the Main North Line railway effectively cut off all land routes into Kaikōura.

As of the morning of 19 November, Kaikōura remained cut off by road due to landslides, damaged bridges and infrastructure, road subsidence, and the risk of falling debris. The NZ Transport Agency said that State Highway 1 would take months to repair, while repairs to the rail line, a key freight connection between Wellington and Christchurch, were likely to take more than a year. Parts of the diversion route via State Highways 63, 6, 65 and 7 were experiencing four times their usual traffic volume.

Mains water supply was mostly restored to Kaikōura township by 19 November, but supply was in a "fragile state" and conservation was necessary. The sewage system was "severely damaged" and unusable.

On 30 November 2016, the Inland Kaikoura Road, redesignated "Kaikoura Emergency Access Road", was reopened to civilian drivers holding a permit and for restricted times of the day. Twenty-five crews had worked to clear 50 landslips on that highway alone. It reopened unrestricted to all traffic on 19 December 2016.

State Highway 1 south of Kaikōura reopened two days later on 21 December 2016, albeit only during daylight hours. Repair of the highway north of Kaikōura took substantially longer, with the repaired highway opening over a year later on 15 December 2017. The long term closure of State Highway 1 north of Kaikōura (between Mangamaunu and Clarence) resulted in a detour through the Lewis Pass being the only major route from Picton to Christchurch. This highway had to be upgraded significantly due to this increased usage.

The section of the Main North Line rail link from Picton south to Lake Grassmere reopened on 16 January 2017. The complete railway from Picton to Christchurch was not restored until 15 September 2017, though service was limited thereafter by continued landslides and repair work; passenger service did not resume until 1 December 2018.

Uplift along the coast at Kaikōura (up to 6 metres) exposed the intertidal zone, which resulted in a large-scale die off of many organisms including Durvillaea bull kelp. The loss of Durvillaea kelp caused ecological disturbance, significantly affecting the biodiversity of the local intertidal community.

The Hutton's shearwater (Puffinus huttoni) colony in the Seaward Kaikoura ranges was extensively damaged by the earthquake. Large landslides buried up to 20% of the existing colony areas. Extensive shaking damaged the integrity of many burrows in the remaining shingle and soil tussock-covered habitat used by these alpine nesting seabirds. The birds were at the peak of egg laying in mid-November and with the quake happening at midnight there would have been considerable losses of birds nesting within breeding burrows.

In the city of Wellington, buildings were damaged, several beyond repair. Damage to docks briefly halted ferry traffic across Cook Strait; more significantly, container shipping did not resume for over ten months. The Wellington City Council was given special powers to require reports from building owners, and there were doubts about application of the rules. Several buildings were closed temporarily because of doubts about stairwells. In Lower Hutt, a cinema complex and part of the carpark in the Queensgate Shopping Centre was deemed unsafe and was demolished. At Ava railway station, one of the pedestrian access ramps was damaged and was removed during the weekend of 17 and 18 December, leaving the station without wheelchair access; the ramp was rebuilt and reopened in October 2018.

A 54-year-old nine-storey office block, the former ICI Building at 61 Molesworth Street, was demolished during December 2016 after fears that it could collapse. The Reading Cinema parking building off Courtenay Place was also damaged and was demolished during January 2017. Both building failures resulted in a section of the adjacent street (Molesworth Street and Tory Street) being closed off for a period.

By February 2017, business insurance claims had passed NZ$900 million. The Wellington region had two thirds (65%) of the total losses, followed by the upper South Island at 25%, Canterbury at 8% and the remaining 2% from other North Island claims.

In 2016 and 2017 it was decided that several other buildings would be demolished, not repaired: the Figaro Block of the Malvina Major Retirement Village in Burma Road, Johnsonville, the eleven year old, seven-storey NZDF headquarters, and Statistics House at Centreport on the waterfront. Several buildings failed because of unsatisfactory design features or collapse of building services in buildings constructed only in the previous decade.

Several houses in the coastal suburb of New Brighton in Christchurch were looted after the occupants left because of tsunami risk.

Schools and universities across the region were told to remain closed until the situation could be assessed, affecting the end-of-year NCEA examinations for secondary school students. Exams on the day of the earthquake were cancelled in many schools, including all of Wellington. Students received derived grades for any exams due to be taken the week of the earthquake.

All content from Kiddle encyclopedia articles (including the article images and facts) can be freely used under Attribution-ShareAlike license, unless stated otherwise. Cite this article:
2016 Kaikōura earthquake Facts for Kids. Kiddle Encyclopedia.