Lincoln is a satellite town of Christchurch; at the 2006 Census, 53% of employed Lincoln residents worked in the city. The town is home to Lincoln University, the oldest agricultural tertiary institution in the Southern Hemisphere and the smallest of New Zealand's eight universities.

In 1862 James Edward FitzGerald of ‘The Springs’ subdivided some of his freehold land for the new township of Lincoln, named after the Earl of Lincoln, a foundation member of the Canterbury Association and from 1851 a member of the management committee. The site of Lincoln on the L1 River would allow for a flour mill to be built to service the growing farming district. Lincoln was laid out in a grid layout and FitzGerald named the four belts North, East, South and West and the cross streets after his own children Robert, Maurice and William. The main streets James, Edward and Gerald were names after himself.
The new township steadily grew and by 1873 Lincoln had a post office, butcher, brewers, a baker and confectioner, a storekeeper who had a hotel, a wheelwright and a carpenter, and a blacksmith. The peaceful quality of Lincoln changed with the arrival of the railway line in 1875 and the opening of the Little River line in 1886.

The proportion of people born overseas was 27.4%, compared with 27.1% nationally. 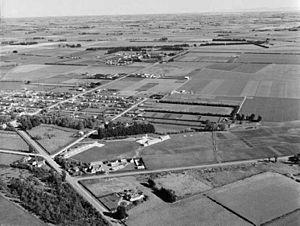 Lincoln photographed by Whites Aviation, May 1957

Lincoln has three schools, two primary and one secondary.

Ararira Springs Primary School is the second primary school for the town. It was tentatively named Lincoln South School and open in February 2019.

Lincoln is the site of Lincoln University. As well as the university, there are a number of other research facilities in Lincoln, including AgResearch, Institute for Plant and Food Research, FAR (Foundation for Arable Research), and Landcare Research. The High Performance Cricket training centre is also based at Lincoln University. Over 400 people are employed at these organisations making Lincoln a busy little country village.

Lincoln also has a maternity hospital, kindergarten and golf course.

Lincoln also hosts the first New Zealand supermarket to have wind turbines generating some of its power: Lincoln New World. The supermarket was built with a number of sustainable initiatives in keeping with the Enviro town it is servicing.

All content from Kiddle encyclopedia articles (including the article images and facts) can be freely used under Attribution-ShareAlike license, unless stated otherwise. Cite this article:
Lincoln, New Zealand Facts for Kids. Kiddle Encyclopedia.