Christchurch Boys' High School, often referred to as CBHS, is a single sex state secondary school in Christchurch, New Zealand. It is situated on a 12-hectare (30-acre) site between the suburbs of Riccarton and Fendalton, 4 kilometres (2.5 mi) to the west of central Christchurch. The school also provides boarding facilities for 130 boys in a residence called Adams House located about 500 metres (1,600 ft) to the east. The school's colours are deep blue and black with an occasional flash of gold.

Established in 1881, the prime purpose of Christchurch Boys' High School was to prepare students for enrolment into the then newly formed Canterbury College, now known as the University of Canterbury. Consequently, it was initially co-located with the College in downtown Christchurch, at the site of the modern-day Christchurch Arts Centre. As the university and school expanded, the school moved to its present location on Straven Road in 1926. The school's present site was originally a farm owned by Canterbury's pioneer settlers, the Deans, and several buildings from the Deans' farm still stand on the grounds. The school's main building is registered by Heritage New Zealand as a Category I heritage building, with registration number 3658.

Christchurch Boys' High School has a rich sporting and academic history and boasts many traditions. The school has produced many All Blacks, with only Auckland Grammar School having produced more. The school can also lay claim to several famous cricketers. There is a unique ANZAC Day service each year that is compulsory for new students of the school to attend to commemorate the hundreds of Old Boys' that fought and died in the two World Wars. The school song 'Altiora Peto' has a third verse that is only heard on this day. In 2004 CBHS provided 2 of New Zealands 'top scholars', one of only 3 schools to do so with the other two both being girls-only schools in the Auckland region.

Of note is the fierce rivalry Boys' High has with Christ's College and the annual Christ's College/Boys' High rugby match is a major event in any calendar year. This rivalry harks back over a hundred years to when the schools were not only the first two all male schools to be founded in Canterbury, but also conveniently situated within 100 m (330 ft) of each other. 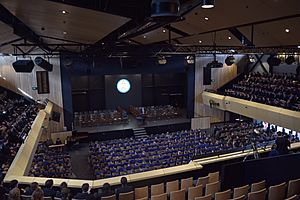 Of late, the school's cultural activities have gained some prominence, in particular its dramatic and musical productions where it often joins forces with its sister school, Christchurch Girls' High School.

All content from Kiddle encyclopedia articles (including the article images and facts) can be freely used under Attribution-ShareAlike license, unless stated otherwise. Cite this article:
Christchurch Boys' High School Facts for Kids. Kiddle Encyclopedia.