Riccarton is a suburb of Christchurch. It is due west of the city centre, separated from it by Hagley Park. Upper Riccarton is to the west of Riccarton.

On 12 April 1840, the ship "Sarah and Elizabeth lands Herriot, McGillivray, Ellis, Shaw (and wife) and McKinnon (with his wife and child) who establish a farm at Riccarton. They are the first European settlers on the plains." In January 1841, they abandon their attempt to farm in the area.

Riccarton House was the homestead commissioned by Jane Deans in circa 1855. The Deans brothers, who along with the Gebbies and the Mansons were the second group of Europeans to settle in Christchurch on the same site as the first group in 1843. A replica of their original cob cottage is on the grounds. Riccarton House is now a restaurant and function centre, and conducts regular tours. The Deans brothers, John and William, named the suburb after the parish in Ayrshire, Scotland, in which they were born. They were also responsible for naming the River Avon after the river of the same name in Lanarkshire, Scotland.

Antonio Hall is located on Riccarton Road. A large property with 279 rooms and once described as "one of the finest in Christchurch and vicinity", it has been left to decay despite a Category II listing with Heritage New Zealand.

Adjacent to Riccarton House is Riccarton Bush, a prominent feature also known as Deans Bush (Māori: Pūtaringamotu). The Māori word Pūtaringamotu means either 'the place of an echo' or 'the severed ear'(ref Pūtaringamotu means either ‘the place of an echo’ or ‘the severed ear’. The latter is a metaphoric expression referring to ‘bush isolated from the rest’. It was one of only two remnants of the original forest that covered the Canterbury plains, escaping the huge fires that swept across the province during the moa hunter period. The other remnant, at Papanui, was cut down in the 1850s. It is dominated by kahikatea trees. A predator-proof perimeter fence has now been erected, with the hope of reintroducing kiwi to the reserve. In 1848, Scots brothers John and William Deans signed an agreement with the New Zealand Company to protect what was originally about 22 hectares of the kahikatea forest at Pūtaringamotu. In 1914, the 6.4 hectares that remained of Deans Bush was formally protected, spearheaded by prominent citizens of Christchurch, including Harry Ell and botanist Dr. Leonard Cockayne.

Riccarton is home to Westfield Riccarton, which at approximately 54,000 square metres (580,000 sq ft) is one of New Zealand's largest shopping malls. The mall was first opened as Riccarton Mall in 1965, and has since undergone multiple redevelopments and expansions. The most recent of these took place in 2009, with the addition of a second floor and new carpark building, while plans for further expansions into neighbouring property are within the design process. This development underpins much of the economic activity in Riccarton, with the nearby stretch of Riccarton Road also a busy retail area with numerous motels. 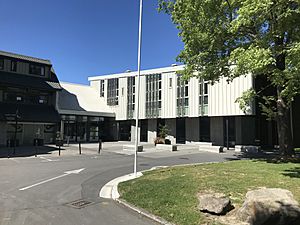 All content from Kiddle encyclopedia articles (including the article images and facts) can be freely used under Attribution-ShareAlike license, unless stated otherwise. Cite this article:
Riccarton, New Zealand Facts for Kids. Kiddle Encyclopedia.