Antonio Hall, also known as Antonio House and previously Kilmead and Campion Hall, is a historic mansion in the Christchurch suburb of Riccarton. Although protected as a Category II heritage building by Heritage New Zealand, it has been left to fall into ruin. A large property with 279 rooms and once described as "one of the finest in Christchurch and vicinity", it was for three decades used as a Catholic seminary. Antonio Hall suffered a major fire in July 2019.

The mansion was built between 1904 and 1909 for Thomas Kincaid and named Kilmead by him. Kincaid was a merchant and Christchurch city councillor. William Albert Paxton Clarkson and Robert Anderson Ballantyne, architects trading as Clarkson & Ballantyne, designed the building. When Kincaid died in 1928, his residence was described in his obituary as "one of the finest in Christchurch and vicinity". The property was purchased by farmer and businessman John Montgomery, who owned the property until 1946. 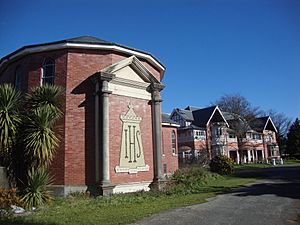 The chapel in the foreground

The Catholic Bishop of Christchurch, Patrick Lyons, bought the property for the Holy Name Seminary as a seminary staffed by the Society of Jesus established for the training of priests. The ageing archbishop of Wellington, Thomas O'Shea, caused great amusement at the formal opening in February 1947 when he talked about the opening of a "cemetery", and then fell asleep during Prime Minister Peter Fraser's speech. The church added a chapel, a library, lecture halls and a dormitory, which ran perpendicular to the original house. All the design work was carried out by the architectural firm Collins and Harman. The seminary closed in 1978 when the church merged the training facility with their school in Mosgiel, and then ran it as student accommodation under the new name Campion Hall, given the proximity to the University of Canterbury. In total, the building has 279 rooms, including over 100 bedrooms.

Patrick and Veronica Luisetti purchased the property in 1981. They continued to run it as a boarding house and gave it the name Antonio Hall in memory of their son Anthony, who had died in 1975. Ownership changed to Wellstar Co Ltd in 1993, a company with owners of an address in Fendalton but who reside mainly in Taiwan. It is said that the company had plans to convert the property to motel units, but this did not happen and the decline of the buildings started. 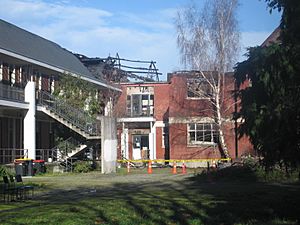 The property was empty when the February 2011 Christchurch earthquake hit, adding structural damage to the damaged caused by years of neglect. No repairs have been carried out since, and the property is unkempt and overgrown. The house caught fire in the afternoon on 12 July 2019. After the fire was brought under control it appeared that about one third of the building had been destroyed. A 14 year old boy later admitted to arson.

The property was registered by the New Zealand Historic Places Trust (since renamed to Heritage New Zealand) on 25 October 1996 as a Category II listing.

All content from Kiddle encyclopedia articles (including the article images and facts) can be freely used under Attribution-ShareAlike license, unless stated otherwise. Cite this article:
Antonio Hall (house) Facts for Kids. Kiddle Encyclopedia.