Mosgiel is an urban satellite of Dunedin in Otago, New Zealand, fifteen kilometres west of the city's centre. Since the re-organisation of New Zealand local government in 1989 it has been inside the Dunedin City Council area, but was physically separate from the contiguous suburbs until developments in the neighbouring suburb of Fairfield joined it to the city. Mosgiel has a population of approximately 10,000.

Mosgiel stands at the north-eastern extremity of the Taieri Plains. The Silver Stream, a tributary of the Taieri River, runs through its north end. The town celebrates its location, calling itself "The pearl of the plain". Its low-lying nature does pose problems, making it prone to flooding after heavy rains.

The place takes its name from Mossgiel in Ayrshire, the farm of the poet Robert Burns, the uncle of the co-founder in 1848 of the Otago settlement, the Reverend Thomas Burns.

Between Mosgiel and the centre of Dunedin stand the rugged Three Mile Hill and Scroggs Hill, which form part of the crater-wall of a long-extinct volcano, the crater being the Otago Harbour. To the south of the town lies one of the many peaks that formed part of the volcano: Saddle Hill, a prominent landmark, visible from a considerable distance and notable for its distinctive shape, lies east of State Highway One where Kinmont Park, a new housing subdivision is located at the foot of the hill.

The Dunedin Southern Motorway, upgraded in 2003, links Mosgiel with the centre of Dunedin. State Highway 87 to Kyeburn starts at a junction with State Highway 1 at the southeastern edge of Mosgiel, the first part of the highway being the main street of Mosgiel, Gordon Road.

Panorama from the summit of Flagstaff Hill, Dunedin, with Mosgiel on the far left.

The site of Mosgiel figures in Māori legend, but surrounding features of the Taieri Plain and adjacent hills have older mythical associations. Of the canoes of South Island migratory legend the fourth and fifth, Takitimu and Arai Te Uru, are mentioned in connection with the area. Maungatua, the large hill to the west of the plain, represents a huge wave which struck the Takitimu, throwing overboard Aonui, who became a pillar on the Tokomairaro Beach. Another account makes Aonui a female survivor of the wreck of the Arai Te Uru, built by Kahui Tipua, who had arrived earlier but sent this vessel to the Polynesian homeland Hawaiki to get kumara. On its return the canoe suffered shipwreck at Shag Point in North Otago, but its survivors quested about the land in search of supplies. If they failed to get back before dawn they turned into natural landscape-features, and this fate befell Aonui. These ancient traditions suggest that some of the earliest Polynesian settlers in the south knew the Taieri Plain.

W.R. Kirk repeated the later story of a taniwha (water-monster), the "familiar spirit or guardian of Te Rakitaounere (also given as Te Rakitauneke) a famous chief and warrior" who lost his master about the Dunedin hills, slithered down the Silverstream, 'Whaka-ehu', and 'lay down and left a hollow Te Konika o te Matamata' on the site of Mosgiel. The taniwha (named Matamata) wriggled down the Taieri, making its tortuous course, and when he died became the seaboard hills, including Saddle Hill. This story has associations with Kati Mamoe, ('Ngati Mamoe' in modern standard Māori) of the late 17th or early 18th century. According to tradition this period also saw the occupation of the kaik (unfortified settlement) near modern Henley – called Tai-ari like the river – and on the hill above it a pa, or fortified settlement, called Omoua. Tukiauau built a pa called Whakaraupuka on the west side of Lake Waihola and his rival, Tuwiriroa, came down from Lake Wakatipu and built one at Taieri Mouth on the coast. Māori soon abandoned Whakaraupuka, but the Taiari settlement at Henley endured into modern times. (Anderson, 1998.)

In February 1770 Captain James Cook described the saddle-shaped hill which became known as Saddle Hill, the landmark east of Mosgiel. The Weller brothers of the Otago whaling station on Otago Harbour (modern Otakou) sent a Mr. Dalziel to inspect the Taieri Plain for a proposed Scottish settlement in 1839, but he gave an unfavourable report. In 1844 Edward Shortland noticed Māori running pigs on the landward slopes of Saddle Hill orMakamaka (as he recorded the hill's Māori name). Charles Kettle surveyed the plain and coastal hills for the Otago Association in 1846 and 1847. He also climbed the westward hills and saw the raised land beyond, the nearest approach of the Central Otago plateau to the sea, which he correctly identified as potentially fine pastoral country.

Following the arrival of the Association's settlers at Dunedin in 1848, a Scots shepherd, Jaffray, brought his wife and dogs along the Māori track from Kaikorai Valley and settled on Saddle Hill in a whare (a Māori-style house) in 1849, establishing the first European farmstead in the district. In the same year the Reverend Thomas Burns, spiritual leader of the Association's settlement, selected the land which would become Mosgiel.

In the mid-1850s Arthur John Burns, a son of Thomas Burns, settled on some of the land. A large stand of native bush stood nearby. The richness of the land and the proximity of the main south road, more or less following the route of an old Māori track, led to early close rural settlement.

The 1861 Otago gold rush saw the development of a road – leading west to the interior – which intersected the site. Arthur John Burns's establishment of the Mosgiel Woollen Company and mill in 1871 brought the settlement of workers in cottages. 1875 saw the north-south road paralleled by a railway, with a branch to the west constructed in 1877. The authorities declared the Mosgiel Town District in 1882 and constituted a Borough Council in 1885. The town grew and became the most substantial in the district. The surrounding plain became a sort of Home County to Dunedin, a place of prosperous farms and of the large houses of successful businessmen with rural tastes. Horse-breeding and racing flourished.

Mosgiel in the twentieth century 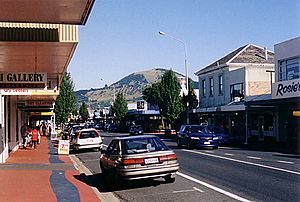 Gordon Road, Mosgiel, with Saddle Hill in the background.

From 1900 to 1997, Mosgiel was the site of Holy Cross College, the national Roman Catholic seminary for the training of priests. The seminary was located in extensive grounds which included a farm. The seminary was moved to Auckland in 1997 but many of its buildings remain and are used for Catholic and other purposes.

The significance of the area for transport grew in the 20th century when the proximity of the plain's flat land to Dunedin saw the establishment of the Taieri Aerodrome, just north of Mosgiel, in the late 1920s and the development of Momona Airport, now Dunedin International Airport, further south on the plain in 1962.

After the Second World War some expected Mosgiel might industrialise extensively, like the Hutt Valley, but expansion remained limited. The bankruptcy of the woollen mill in 1980 and its eventual closure has not been offset by other industrial developments.

The late 20th century's increasingly ageing New Zealand population saw the expansion of housing for the elderly, with several retirement villages and communities located in the vicinity. In recent decades the hills above the plain have seen some division into lifestyle blocks. The 2003 completion of the Fairfield bypass shortened commuting-time via the southern motorway (part of State Highway 1) to the city centre.

Mosgiel's economy until recent[update] years focused on the manufacture of wool-products and many elderly New Zealanders still[update] associate the word "Mosgiel" with the former Mosgiel Woollen Mills. Today[update], Mosgiel's income comes from many sources, including local shops, cafés and bars. It remains an important service-centre for the surrounding farming community. It also hosts one of New Zealand's largest agricultural research institutes, Invermay. Until recently the largest employer was Fisher & Paykel which manufactured DishDrawer dishwasher and ranges at their Mosgiel factory. The closure of this plant was announced in early 2008. 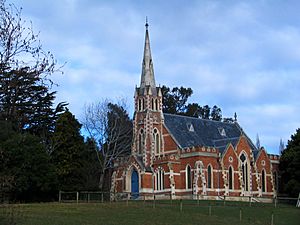 The Mosgiel Woollen Mill built in 1871 in Factory Road, was the second woollen mill to open in New Zealand. The mill was integral to the town and a significant employer from when it opened until the end of the 20th century when it closed.

In 1936, while still a schoolboy, the artist Colin McCahon took part in a family outing, driving from the seaboard over the coastal hills. Looking across the Taieri Plain towards Central Otago he had what he described as a "vision", seeing a pre-Biblical "landscape of splendour order and peace" – which, he said, it became his life's work to communicate. The same view, though seen from a greater distance, had inspired Charles Kettle in the 1840s.

In 1953 the young Ralph Hotere, later to become one of New Zealand's best-regarded artists, qualified as a pilot on Tiger Moths at the Taieri Aerodrome Training School, Mosgiel. 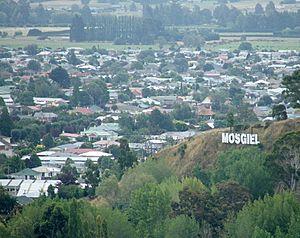 Mosgiel's sign forms an unusual feature. Modelled on the famous Hollywood Sign, the seven letters of the Mosgiel sign perch on a hillside close to State Highway 1. Because of this sign locals sometimes (though not very often) jokingly refer to Mosgiel as "Mollywood".

The distinctive outline of Saddle Hill forms the eastern border of the greater Mosgiel area.

In recent[update] years Mosgiel has experienced increased urbanisation and a growth in population. The revival has come about in part due to people moving from Dunedin's inner suburbs. Mosgiel has recently[update] seen the opening or refurbishment of cafés and bars aimed at a younger market, and workers have built stages one and two of a planned larger playground.

In 2010 Mosgiel became home to the first Warehouse Local store, and a McDonald's restaurant was planned to go next to New World, however due to strict restrictions that would be imposed on the restaurant the idea has been scrapped.

All content from Kiddle encyclopedia articles (including the article images and facts) can be freely used under Attribution-ShareAlike license, unless stated otherwise. Cite this article:
Mosgiel Facts for Kids. Kiddle Encyclopedia.