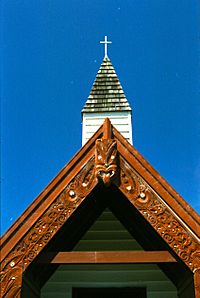 Māori Christian church in Akaroa. Christianity was adopted by Māori across New Zealand during the 19th century.

Māori religion encompasses the various religious beliefs and practices of the Māori, the Polynesian indigenous people of New Zealand.

Certain practices are followed that relate to traditional concepts like tapu. Certain people and objects contain mana - spiritual power or essence. In earlier times, tribal members of a higher rank would not touch objects which belonged to members of a lower rank. This was considered "pollution" and persons of a lower rank could not touch the belongings of a highborn person without putting themselves at risk of death.

Tapu can be interpreted as "sacred", as "spiritual restriction" or "implied prohibition"; it involves rules and prohibitions. There are two kinds of tapu, the private (relating to individuals) and the public tapu (relating to communities). A person, an object or a place, which is tapu, may not be touched by human contact, in some cases, not even approached. A person, object or a place could be made sacred by tapu for a certain time.

In pre-contact society, tapu was one of the strongest forces in Māori life. A violation of tapu could have dire consequences, including the death of the offender through sickness or at the hands of someone affected by the offence. In earlier times food cooked for a person of high rank was tapu, and could not be eaten by an inferior. A chief's house was tapu, and even the chief could not eat food in the interior of his house. Not only were the houses of people of high rank perceived to be tapu, but also their possessions including their clothing. Burial grounds and places of death were always tapu, and these areas were often surrounded by a protective fence.

Today, tapu is still observed in matters relating to sickness, death, and burial:

In the early 19th century, many Māori embraced Christianity and its concepts. Large numbers of converts joined the Church of England and the Roman Catholic Church, both of which are still highly influential in Māori society. The Māori aspect of the Church of England in New Zealand has long been recognised by the ordination of Māori priests as Bishop of Aotearoa; a well-known and sometimes controversial holder of that title was the late Rev. Whakahuihui Vercoe, who is remembered for a frank speech he delivered in the presence of Queen Elizabeth II during a Waitangi Day ceremony. The Roman Catholic Church also ordains Māori to high positions. Other churches were also locally successful in the 19th century, including, among others, the Presbyterian Church. The Church of Jesus Christ of Latter-day Saints was also very successful in gaining Maori converts from the 1880s on, and by 1901 there were nearly 4,000 Maori members in 79 branches.

Today, Christian prayer (karakia) is the expected way to begin and end Māori public gatherings of many kinds. Prayers are also made at the beginning of many new projects, personal journeys, and endeavours.

All content from Kiddle encyclopedia articles (including the article images and facts) can be freely used under Attribution-ShareAlike license, unless stated otherwise. Cite this article:
Māori religion Facts for Kids. Kiddle Encyclopedia.