Waitangi Day (Māori: Te Rā o Waitangi), the national day of New Zealand, marks the anniversary of the initial signing – on 6 February 1840 – of the Treaty of Waitangi, which is regarded as the founding document of the nation. The first Waitangi Day was not celebrated until 1934, and it was made a national public holiday in 1974.

In present-day New Zealand, the anniversary is observed annually on 6 February and the day is usually recognised as a public holiday (unless the date falls on a Saturday or Sunday, when the Monday that immediately follows becomes the public holiday). Ceremonies take place at Waitangi and elsewhere to commemorate the signing of the treaty. A variety of events are staged, including parties, Māori hui (social gatherings), reflections on New Zealand history, official awards and citizenship ceremonies. The commemoration has also been the focus of protest by Māori activists, and is occasionally the focus of controversy. 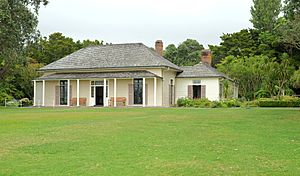 Treaty House and grounds at Waitangi, where the treaty was first signed. The first Waitangi Day was celebrated in the grounds on 6 February 1934.

The Treaty of Waitangi was first signed on 6 February 1840 on the grounds of James Busby's house—now known as Treaty House—at Waitangi, in the Bay of Islands. The treaty was signed by representatives acting on behalf of the British Crown and, initially, about 45 Māori chiefs. Over the course of the next seven months, copies of the treaty were toured around the country to give other chiefs the opportunity to sign. The signing had the effect of securing British sovereignty over the islands of New Zealand, which was officially proclaimed on 21 May 1840.

Prior to 1934, most celebrations of New Zealand's founding as a colony were held on 29 January, the date on which William Hobson arrived in the Bay of Islands to issue the proclamation of his appointment, which had been prepared by colonial office officials in England. Hobson had no draft treaty. From the British perspective the proclamation was the key legal document, "what the treaty said was less important".

In 1932, Governor-General Lord Bledisloe and his wife purchased and presented to the nation the run-down house of James Busby, where the treaty was initially signed. They subsequently donated GB£500 to restore the building. The Treaty House and grounds were made a public reserve, which was dedicated on 6 February 1934. This event is considered to be the first Waitangi Day.

In 1940, another event was held at the grounds, commemorating the 100th anniversary of the treaty signing. The event was a success and helped raise the profile of the treaty and its day of observance in the national consciousness.

Annual commemorations of the treaty signing began in 1947. The 1947 event was a Royal New Zealand Navy ceremony centring on a flagpole which the Navy had paid to erect in the grounds. The ceremony was brief and featured no Māori. The following year, a Māori speaker was added to the line-up, and subsequent additions to the ceremony were made nearly every year. From 1952, the governor-general attended, and from 1958 the prime minister also attended, although not every year. From the mid-1950s, a Māori cultural performance was usually given as part of the ceremony. Many of these early features remain a part of Waitangi Day ceremonies, including a naval salute, the Māori cultural performance (now usually a pōwhiri, a ceremonial welcome), and speeches from a range of Māori and Pākehā dignitaries. 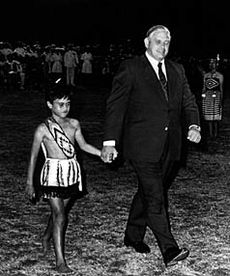 Norman Kirk and a Māori boy on Waitangi Day, 1973

Waitangi Day became a nationwide public holiday on its observance in 1974 by first undergoing a name change. In 1971 the Labour shadow minister of Māori Affairs, Matiu Rata, introduced a private member's bill to make Waitangi Day a national holiday, to be called New Zealand Day. This was not passed into law.

After the 1972 election of the third Labour government under Prime Minister Norman Kirk, it was announced that from 1974, Waitangi Day would be a national holiday known as New Zealand Day. The New Zealand Day Act legislation was passed in 1973. For Kirk, the change was simply an acceptance that New Zealand was ready to move towards a broader concept of nationhood. Diplomatic posts had for some years marked the day, and it seemed timely in view of the country's increasing role on the international stage that the national day be known as New Zealand Day. At the 1974 commemorations, the Flag of New Zealand was flown for the first time at the top of the flagstaff at Waitangi, rather than the Union Flag, and a replica of the flag of the United Tribes of New Zealand was also flown.

The election of the third National government in 1975 led to the day being renamed Waitangi Day because the new prime minister, Robert Muldoon, did not like the name "New Zealand Day" and many Māori felt that it debased the treaty. Another Waitangi Day Act was passed in 1976 to change the name back to Waitangi Day and restore Northland's anniversary day holiday to that of Auckland.

Waitangi Day underwent 'Mondayisation' in legislation enacted in 2013, shifting the public holiday to Monday if 6 February falls on a Saturday or Sunday. 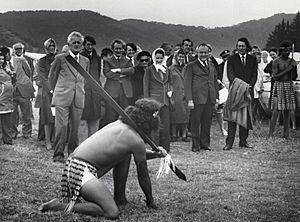 Commemorations at Waitangi usually commence the previous day, 5 February, at the Ngāpuhi marae Te Tii, when political dignitaries are welcomed onto the marae and hear speeches from the local iwi. These speeches often deal with the issues of the day, and vigorous and robust debate occurs. Politicians are usually granted speaking rights, but on occasion, the privilege has been withdrawn, as with Leader of the Opposition Helen Clark in 1999, Prime Minister John Key in 2016 (when one faction indicated it would even block him from entering the marae), and Prime Minister Bill English in 2017. In 2018, Jacinda Ardern was the first Prime Minister to attend the ceremony in three years.

At dawn on Waitangi Day, the Royal New Zealand Navy raises the New Zealand Flag, Union Flag and White Ensign on the flagstaff in the treaty grounds. The ceremonies during the day generally include a church service and cultural displays such as dance and song. Several waka and a navy ship also re-enact the coming ashore of Governor Hobson to sign the treaty. The day closes with the flags being lowered by the Navy in a traditional ceremony. 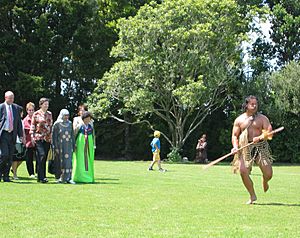 Some marae use the day as an open day and an educational experience for their local communities, giving them the opportunity to experience Māori culture and protocol, or as an opportunity to explain where they see Māori are and the way forward for Māori in New Zealand. Commemorations are largely muted in comparison to those seen on the national days of most countries. There are no mass parades or firework displays, nor truly widespread commemorations. At Government House in Auckland, citizenship ceremonies are usually held. As the day is a public holiday, and coincides with the warmest part of the New Zealand summer, many people take the opportunity to spend the day at the beach – an important part of New Zealand culture.

Since 2014, the New Zealand Society of Authors awards the Waitangi Day Literary Honours on Waitangi Day.

At the Kingston Butter Factory in Kingston, Queensland, Australia, the Te Korowai Aroha (Cloak of Love) Association held a multicultural festival to mark Waitangi Day annually from 2002. In Sydney, an estimated 8,000 people attended the 2013 Waitangi Day Festival at Holroyd Gardens, Merrylands, an annual event in its fifth year. The festival featured displays of artefacts, performance of the haka, Māori cuisine and culture, tattooing and wood carving. 6 February 2015 saw the inaugural Waitangi Day Commemoration held at Nurragingy Reserve, where the focus is more on the document itself, the Treaty process and the significance to Māori and Pākehā today. It was co-hosted by the Blacktown City Council and the New South Wales Māori Wardens.

In London, England, which has one of the largest New Zealand expatriate populations, the occasion is commemorated by the Waitangi Day Ball, held by the New Zealand Society UK. The focus of the event is a commemoration of New Zealand's unity and diversity as a nation. The Ball also hosts the annual UK New Zealander of the Year awards, cultural entertainment from London-based Māori group Ngāti Rānana and fine wine and cuisine from New Zealand. A service is also held by the society at the church of St Lawrence Jewry.

Elsewhere in the world

For Waitangi Day 2007, Air New Zealand commissioned a number of New Zealanders living in Los Angeles and Southern California to create a sand sculpture of a silver fern on the Santa Monica Beach, creating a stir in the surrounding area.

All content from Kiddle encyclopedia articles (including the article images and facts) can be freely used under Attribution-ShareAlike license, unless stated otherwise. Cite this article:
Waitangi Day Facts for Kids. Kiddle Encyclopedia.