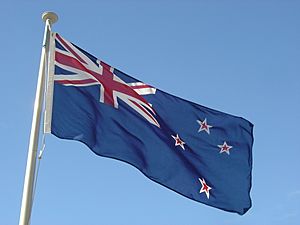 The flag of New Zealand outside the Beehive in Wellington

The flag of New Zealand is a defaced Blue Ensign with the Union Flag in the canton, and four red stars with white borders to the right. The stars' pattern represents the asterism within the constellation of Crux, the Southern Cross.

New Zealand's first flag, the flag of the United Tribes of New Zealand, was adopted in 1834, six years before New Zealand became a British colony following the signing of the Treaty of Waitangi in 1840. Chosen by an assembly of Māori chiefs at Waitangi in 1834, the flag was of a St George's Cross with another cross in the canton containing four stars on a blue field. After the formation of the colony in 1840, British ensigns began to be used. The current flag was designed and adopted for use on Colonial ships in 1869, was quickly adopted as New Zealand's national flag, and given statutory recognition in 1902.

For several decades there has been debate about changing the flag. In 2016, a two-stage binding referendum on a flag change took place with voting on the second final stage closing on 24 March. In this referendum, the country voted to keep the existing flag by 57% to 43%.

Flag of the United Tribes 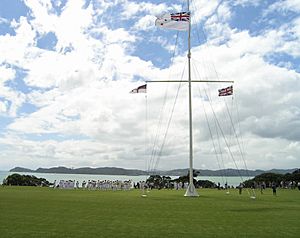 The flag pole at Waitangi, flying (left – right) the Flag of the United Tribes of New Zealand, the Ensign of the Royal New Zealand Navy and the Union Flag, 5 February 2006.

The need for a flag of New Zealand first became clear when the trading ship Sir George Murray, built in the Hokianga, was seized by Customs officials in the port of Sydney. The ship had been sailing without a flag, a violation of British navigation laws. New Zealand was not a colony at the time and had no flag. Among the passengers on the ship were two high-ranking Māori chiefs, believed to be Patuone and Taonui. The ship's detention was reported as arousing indignation among the Māori population. Unless a flag was selected, ships could continue to be seized.

The first flag of New Zealand was adopted 9 (or 20) March 1834 by a vote made by the United Tribes of New Zealand, a meeting of Māori chiefs convened at Waitangi by British resident James Busby. The United Tribes later made the Declaration of Independence of New Zealand at Waitangi in 1835. Three flags were proposed, all designed by the missionary Henry Williams, who was to play a major role in the translation of the Treaty of Waitangi in 1840. The chiefs rejected two other proposals which included the Union Flag, in favour of a modified St George's Cross or the White Ensign, which was the flag used by Henry Williams on the Church Missionary Society ships. This flag became known as the flag of the United Tribes of New Zealand and was officially gazetted in New South Wales in August 1835, with a general description not mentioning fimbriation or the number of points on the stars. The need for a flag was pressing, not only because New Zealand-built ships were being impounded in Sydney for not flying a national flag, but also as a symbol of the independence declared by the Māori chiefs.

The flag is still flown on the flag pole at Waitangi, and can be seen on Waitangi Day.

Flag of the United Tribes

After the signing of the Treaty of Waitangi, the British Union Flag was used, although the former United Tribes flag was still used by a number of ships from New Zealand and in many cases on land. The New Zealand Company settlement at Wellington, for example, continued to use the United Tribes flag until ordered to replace it by Governor William Hobson in May 1840 (following his declaration of British sovereignty).

Flags based on defaced Blue Ensign 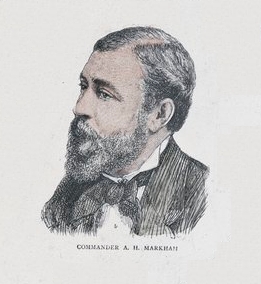 The first flag of New Zealand to be based on the British blue ensign was introduced in 1867 following the Colonial Navy Defence Act 1865, which required all ships owned by colonial governments fly the defaced Royal Navy blue ensign with a colonial badge. New Zealand did not have a colonial badge, or indeed a coat of arms of its own at this stage, and so the letters "NZ" were simply added to the blue ensign.

In 1869 the First Lieutenant of the Royal Navy vessel Blanche, Albert Hastings Markham, submitted a design to Sir George Bowen, the Governor of New Zealand, for a national ensign for New Zealand. His proposal, incorporating the Southern Cross, was approved. It was initially used only on government ships, but was adopted as the de facto national flag. To end confusion between various designs of the flag, the Liberal Government passed the Ensign and Code Signals Bill, which was approved by King Edward VII on 24 March 1902, declaring the flag as New Zealand's national flag. The United Tribes flag design also features on the back of the Second Boer War medals presented to soldiers who served in the war, which indicates that the United Tribes flag was used widely in New Zealand until around this time.

Flags based on defaced Blue ensign

One of the first recorded accounts of the New Zealand national Blue Ensign flag being flown in battle was at Quinn's Post, Gallipoli, in 1915. It was not, however, flown officially. The flag was brought back to New Zealand by Private John Taylor, Canterbury Battalion. The first time the Flag of New Zealand was flown in a naval battle and the first time officially in any battle, was from the HMS Achilles during the Battle of the River Plate in 1939. 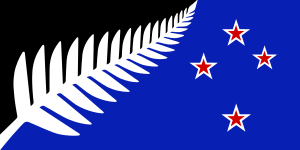 Debate on keeping or changing the New Zealand flag started before May 1973, when a remit to change the flag was voted down by the Labour Party at their national conference. In November 1979 Minister of Internal Affairs Allan Highet suggested that the design of the flag should be changed, and sought an artist to design a new flag with a silver fern on the fly, but the proposal attracted little support. In 1998 Prime Minister Jenny Shipley backed Cultural Affairs Minister Marie Hasler's call for the flag to be changed. Shipley, along with the New Zealand Tourism Board, backed the quasi-national silver fern flag, using a white silver fern on a black background as a possible alternative flag, along the lines of the Canadian Maple Leaf flag. On 5 August 2010 Labour list MP Charles Chauvel introduced a member's bill for a consultative commission followed by a referendum on the New Zealand flag.

On 11 March 2014, Prime Minister John Key announced in a speech his intention to hold a referendum, during the next parliamentary term, on adopting a new flag. Following National's re-election the details of the two referendums were announced. The first referendum was set for November 2015 allowing voters to decide on a preferred design from five choices. The second referendum would see the preferred design voted on against the current flag in March 2016.

Under the New Zealand Flag Referendums Bill, in the event that the flag were to change, the current flag (described as the "1902 flag") of New Zealand may continue to be used, and is "recognised as a flag of historical significance." Official documents depicting the current flag, such as drivers' licences, would continue to be valid and would be replaced through matter of course (e.g., driver licence renewals).

On 11 December 2015, preliminary results were announced for the first referendum. The blue and black design, with a silver fern and red stars, was the winning flag. This flag design did not win the second referendum, as preliminary results announced on 24 March 2016 showed the current flag was chosen to remain the New Zealand flag. 56.7% were in favour of retaining the flag, with a voter turnout of 67.3%. 43.3% were in favour of changing the flag to the Lockwood design. Only six of the 71 electorates voted in favour of changing the flag.

Many other flags also contain the Southern Cross, some as far back as the 1823/24 National Colonial Flag for Australia.

Other flags of New Zealand

This gallery presents other flags of New Zealand.

Other flags of New Zealand

All content from Kiddle encyclopedia articles (including the article images and facts) can be freely used under Attribution-ShareAlike license, unless stated otherwise. Cite this article:
Flag of New Zealand Facts for Kids. Kiddle Encyclopedia.