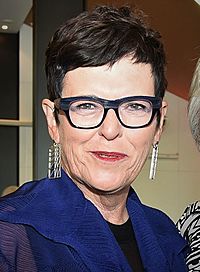 Shipley was born in Gore, Southland. She was raised in rural Canterbury.

Before entering politics, Shipley was involved with several community organizations.

Shipley was elected to the New Zealand Parliament in the 1987 election. She won the Ashburton electorate.

In December 1997, after Bolger resigned as Prime Minister, Shipley was elected as his replacement unopposed.

Shipley was the first Prime Minister to attend the gay and lesbian Hero Parade.

All content from Kiddle encyclopedia articles (including the article images and facts) can be freely used under Attribution-ShareAlike license, unless stated otherwise. Cite this article:
Jenny Shipley Facts for Kids. Kiddle Encyclopedia.