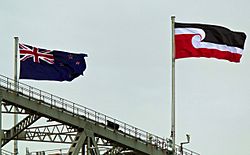 The Tino rangatiratanga flag flying next to the Flag of New Zealand on the Auckland Harbour Bridge, Waitangi Day, 2012.

Tino rangatiratanga is a Māori language term that means "absolute sovereignty." Sovereignty means absolute power to rule something without someone else interfering. In this case, it refers to the ability of the Māori people (the indigenous people of New Zealand) to rule themselves and be recognized as the owners of the land. "Tino rangatiratanga" shows up in the Māori version of the Treaty of Waitangi, which they signed with the British in 1840. They were promised that they would have tino rangatiratanga forever in the treaty. However, this concept was not respected since the British colonizers took a lot of things from the Māori people. To this day, people in New Zealand do not agree on what "tino rangatiratanga" means or what kind of things it is supposed to cover.

A rangatira is a chief in the Māori culture. The suffix -tanga is added so rangatiratanga refers to the qualities of being a chief. "Tino" is a Māori word that means "most" or "absolute." So by using this term, the British were allowing Maori chiefs to have complete control and allow them to use their powers as chiefs.

Some people think that the term can be used to describe self-determination, autonomy, or Māori independence.

Here are the meaning of the terms from an online Māori dictionary:

There is a lot of confusion about the Treaty of Waitangi because Articles 1 and 2 in the treaty say different things.

According to the Māori version of the treaty, Article 1 is talking about kawanatanga (governorship) while Article 2 is talking about tino rangatiratanga (absolute chieftainship). To them, these are two totally different concepts. Therefore, they believe that they never gave away their land rights and ability to rule themselves. In fact, a tribunal that was created to focus on the Treaty of Waitangi said that the Māori can never give up those rights and never did..

There is a Tino rangatiratanga flag that is used to represent the Māori people. It is red, white, and black. It was designed by Māori artists Hiraina Marsden, Jan Smith and Linda Munn in 1990 as part of a contest.

A woman named Poua Erstich came up with the meaning for the flag. The red represents the sky, the black is earth, and the white is light separating the sky and earth. The flag is supposed to show the Māori story of how the world was created.

This flag is flown next to the flag of New Zealand to show people that the land still belongs to the Māori. Sometimes, this flag is used in protests to show how certain issues are affecting Māori.

All content from Kiddle encyclopedia articles (including the article images and facts) can be freely used under Attribution-ShareAlike license, unless stated otherwise. Cite this article:
Tino rangatiratanga Facts for Kids. Kiddle Encyclopedia.