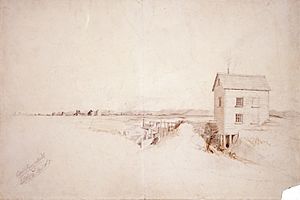 Fendalton is a suburb of Christchurch, in the South Island of New Zealand.

Fendalton was originally known as Fendall Town, named after the original settler of the land, Walpole Cheshire Fendall (1830–1913). Fendall emigrated from Yorkshire in 1850 and took up land north of the Waimairi Stream. The name Fendall Town was soon applied to the area northwest of Hagley Park all the way to where the airport is located today. Early spelling also included Fendall's Town and Fendaltown, but by the 1880s Fendalton had become the most common form.

A history of the suburb can be found in "Fendall's Legacy: A history of Fendalton and north-west Christchurch" by Frieda Looser.

Fendalton is situated to the west of the city centre, close to the University of Canterbury at Ilam and the major retail area of Riccarton. It is also close to the main route from the central city to the Christchurch International Airport to the northwest.

Fendalton has a reputation as one of the country's more well-to-do and refined suburbs, and is one of the older residential districts of the city.

The proportion of people born overseas was 27.4%, compared with 27.1% nationally.

One high school lies directly within the suburb - Christchurch Boys' High School. The school includes boarding facilities, and has a roll of 1382. The school opened in 1881, and moved to its present site in 1926.

While Christchurch Girls' High School catchment zone encompasses much of Fendalton, the school itself lies within the suburb of Riccarton.

The main primary school in Fendalton is Fendalton Open Air School, originally called Clyde Road Primary School. It has a roll of 448. It opened in 1875.

All content from Kiddle encyclopedia articles (including the article images and facts) can be freely used under Attribution-ShareAlike license, unless stated otherwise. Cite this article:
Fendalton Facts for Kids. Kiddle Encyclopedia.