Addington is a major suburb of Christchurch, New Zealand. It is sited 2.5 kilometres (1.6 mi) south-west of the city centre.

The suburb was named for the country residence of Bishop John Sumner, one of the leading members of the Canterbury Association.

As an inner city suburb, it has a mix of residential, retail and light industrial properties. The suburb is home to Horncastle Arena and also close to many other sports venues, notably Hagley Park to the north. It is also home to one of Christchurch's main horse-racing venues, Addington Raceway.

The New Zealand Railways Department's Addington Workshops were situated here until their closure in the 1980s; the historic concrete water-tower survives, next to the new Christchurch railway station. The previous railway station is located on Moorhouse Avenue in neighbouring Sydenham. The new station at Addington opened in 1994 and now serves the TranzAlpine, which takes tourists on the 231-kilometre (144 mi) coast-to-coast journey from Christchurch to Greymouth and is considered one of the most spectacular train rides in the world, and the Coastal Pacific, which takes a 348-kilometre (216 mi) journey to Picton.

Addington was the home of the oldest blending plant in the Southern Hemisphere until it was demolished after sustaining some damage in the February 2011 Christchurch earthquake. The demolition of the plant sparked some controversy as the plant had been lined up to be carefully taken apart in an attempt to save Oregon timber valued at over $600,000. 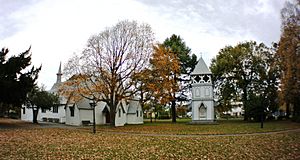 Central to Addington's residential area is St Mary's Anglican Church, which is an historical building surrounded by the spacious grounds and trees of Church Square. The grounds are used by the community for galas, pancake races (on Shrove Tuesday) fairs and weddings. The buildings and surrounding area is registered by Heritage New Zealand as a historic area, with registration number 7516.

The Court Theatre, whose buildings were damaged in the earthquake, relocated to "The Shed" and started operating on 10 December 2011.

All content from Kiddle encyclopedia articles (including the article images and facts) can be freely used under Attribution-ShareAlike license, unless stated otherwise. Cite this article:
Addington, New Zealand Facts for Kids. Kiddle Encyclopedia.