Kids Encyclopedia Facts
This page is about the suburb. For the electorate, see Sydenham (New Zealand electorate).

Sydenham is an inner suburb of Christchurch, New Zealand, two kilometres south of the city centre, on and around the city's main street, Colombo Street. It is a residential, retail and light industrial suburb. 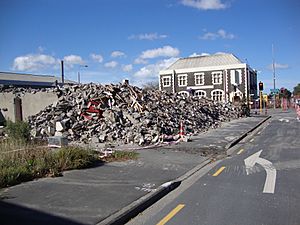 Sydenham Heritage Church after demolition, with the Post Office in the background

The Sydenham borough was formed in 1876 and Charles Allison advocated that the new local body in the area be the Sydenham Borough Council named after Charles Prince’s crockery and china shop on Colombo Street called "Sydenham House". The crockery shop, in turn, was named after the north-west Kent town of Sydenham, which is now a London suburb within the London Borough of Lewisham.

The first council and its first mayor, Mayor George Booth, were elected in 1877. On 31 March 1903, the borough amalgamated with the City of Christchurch and became a suburb. At that time Sydenham already had its own swimming-baths, fire-engine, cemetery and recreation grounds. Apart from the large cities, Sydenham was the largest borough in New Zealand at the time. 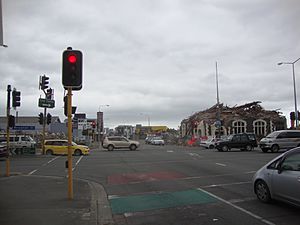 Entrance to Sydenham in December 2011, with the Heritage Church and the Post Office after demolition

Sydenham is separated from the central city by the South Island Main Trunk Railway and Moorhouse Avenue. State Highway 73 runs through the southern part of Sydenham. The southern boundary of Sydenham is Tennyson Street.

Sydenham has a number of heritage buildings registered by Heritage New Zealand, with some already lost or to be lost due to the February 2011 Christchurch earthquake. The New Zealand Loan and Mercantile Woolstore in Durham Street is the only Category I heritage building. Coming from the south, the Sydenham Post Office and the Sydenham Heritage Church formed an entry into the strip shopping area along Colombo Street, but the church was controversially demolished shortly after the February earthquake.

Nazareth House Chapel is located west of Sydenham Park and belongs to a retirement village. Blackheath Place are residential brick terrace houses that are rather uncommon in New Zealand. Three registered cottages are located in Shelley and Tennyson Streets. 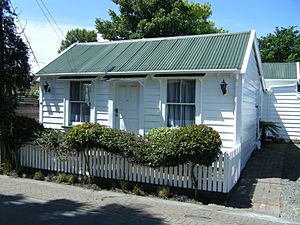 This historic cottage is typical of settler housing in Sydenham Christchurch. It was built in 1876 from totara. 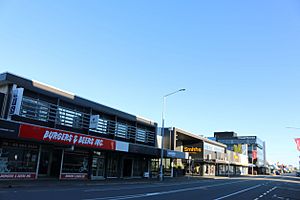 There are many restaurants and takeaway food establishments on Colombo Street.

There is a vibrant art district in Sydenham with at least five art galleries located in Sydenham. These include Chambers Art Gallery, Jonathan Smart Gallery, Fiksate Studio & Gallery, Form Gallery, City Art Depot, and NZ Art Broker. Buildings feature street art works and many public art events have been held in Sydenham. As part of the Sydenham master plan, artwork was installed on Colombo street as a gateway into Sydenham.

North of Brougham Street, there are many light industrial businesses located in Sydenham.

The proportion of people born overseas was 34.8%, compared with 27.1% nationally.

Although some people objected to giving their religion, 50.0% had no religion, 32.6% were Christian, 2.2% were Buddhist and 4.3% had other religions. 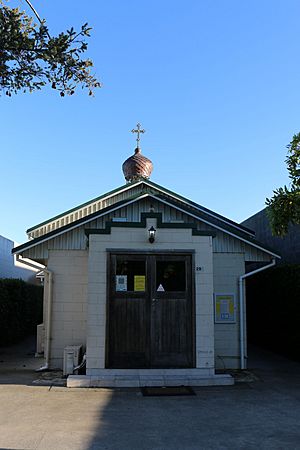 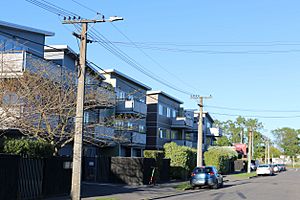 The proportion of people born overseas was 31.6%, compared with 27.1% nationally. 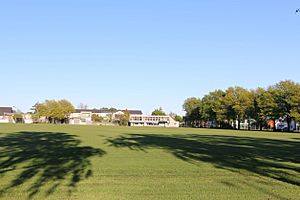 Sydenham Park is public open space that also acts as the home ground for Sydenham Cricket Club, Sydenham Hockey Club and Sydenham Rugby Club. All three clubs have provided players for their respective New Zealand teams. These including Stephen Fleming for cricket, John Radovonich for hockey and Charlie Oliver for rugby union. Ben Stokes, the English cricketer spent time in 2020 working with the Sydenham Cricket Club.

Sydenham School, on the corner of Brougham and Colombo Streets, was first opened in 1872 and known as Colombo Road School. The land cost one hundred pounds to purchase and a further 862 pounds to build the school. By March 1873, there were almost 400 children enrolled. The school was renamed Sydenham school in 1880. At one stage it was the largest school in New Zealand. The school was closed in December 2000.

All content from Kiddle encyclopedia articles (including the article images and facts) can be freely used under Attribution-ShareAlike license, unless stated otherwise. Cite this article:
Sydenham, New Zealand Facts for Kids. Kiddle Encyclopedia.