Somerfield is a suburb in the south of Christchurch, New Zealand. 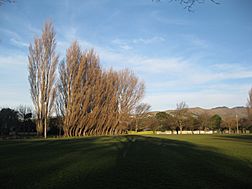 Edward Bishop, an early Mayor of Christchurch, was born at Somerfield House in Maidstone, Kent, England in 1811. He came to Christchurch on the Charlotte Jane with all his siblings, and together with his youngest brother Frederick Augustus Bishop (1818–1894) bought land south of Christchurch at the Heathcote River. They called their farm Somerfield, after their birthplace, and they appear on both the 1853 jury list and electoral roll as living there. Somerfield has since been adopted for the name of the suburb in that part of Christchurch. The 17-hectare (42-acre) property was in 1864 owned by Richard Packer, who in turn passed it on to his son Henry William Packer (1831–1890).

All content from Kiddle encyclopedia articles (including the article images and facts) can be freely used under Attribution-ShareAlike license, unless stated otherwise. Cite this article:
Somerfield, New Zealand Facts for Kids. Kiddle Encyclopedia.