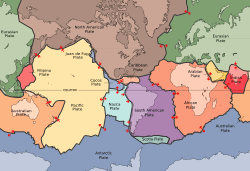 The tectonic plates of the world were mapped in the second half of the 20th century. 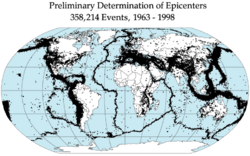 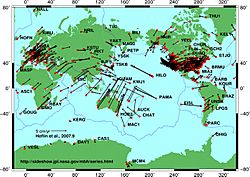 Plate tectonics is a theory of geology. It has been developed to explain large scale motions of the Earth's lithosphere. This theory builds on older ideas of continental drift and seafloor spreading.

Dissipation of heat from the mantle is the original source of energy driving plate tectonics. Exactly how this works is still a matter of debate. The driving forces of plate motion continue to be active subjects of on-going research.

Continental lithosphere is typically about 200 kilometres (120 mi) thick, though this also varies considerably between basins, mountain ranges, and stable cratonic interiors of continents. The two types of crust also differ in thickness, with continental crust being considerably thicker than oceanic: 35 kilometres (22 mi) vs. 6 kilometres (3.7 mi). 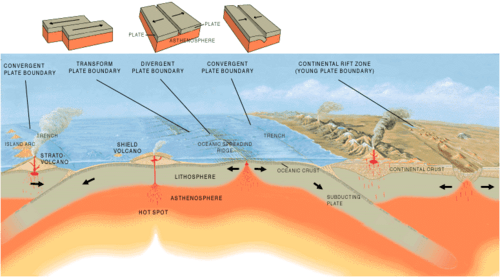 Three types of plate boundaries and a hot spot

The lithosphere consists of tectonic plates. There are eight major and many minor plates. The lithospheric plates ride on the asthenosphere. These plates move at one of three types of plate boundaries.

Earthquakes, volcanic activity, mountain-building, and oceanic trench formation occur along plate boundaries. The lateral movement of the plates varies from:

Tectonic plates can create mountains, earthquakes, volcanoes, mid-oceanic ridges and oceanic trenches, depending on which way the plates are moving.

Depending on how they are defined, there are usually seven or eight major plates:

All content from Kiddle encyclopedia articles (including the article images and facts) can be freely used under Attribution-ShareAlike license, unless stated otherwise. Cite this article:
Plate tectonics Facts for Kids. Kiddle Encyclopedia.