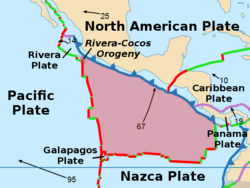 The Cocos plate is a geologically young oceanic tectonic plate. It is beneath the Pacific Ocean off the west coast of Central America. Cocos Island rides on it.

This complicated set of little plates is caused by what geologists call the Cocos-Nazca spreading system. The leading edge is subducting (going under existing plates). This causes the Central American Volcanic Arc.

All content from Kiddle encyclopedia articles (including the article images and facts) can be freely used under Attribution-ShareAlike license, unless stated otherwise. Cite this article:
Cocos plate Facts for Kids. Kiddle Encyclopedia.