Ophiolitic serpentinite from Austria, originally from the Proterozoic-early Paleozoic upper mantle. This peridotite rock was metamoposed in later mountain ranges

Cross-section of an ophiolite

An ophiolite is a section of the Earth's oceanic crust and the underlying upper mantle that has been uplifted and exposed above sea level. The rocks which make up ophiolites are an altered form of basalt. The rocks are often green.

They are found in the mountain belts such as the Alps or the Himalayas. They show where former ocean basins were consumed by subduction. This was one of the discoveries of plate tectonics. Ophiolites have always played a central role in plate tectonic theory and the interpretation of ancient mountain belts. 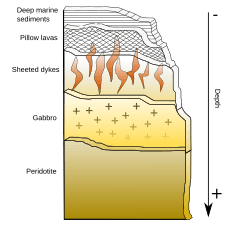 Idealized stratigraphic sequence of an ophiolite

The stratigraphic sequence seen in ophiolites is caused by lithosphere-forming processes at mid-oceanic ridges:

All content from Kiddle encyclopedia articles (including the article images and facts) can be freely used under Attribution-ShareAlike license, unless stated otherwise. Cite this article:
Ophiolite Facts for Kids. Kiddle Encyclopedia.