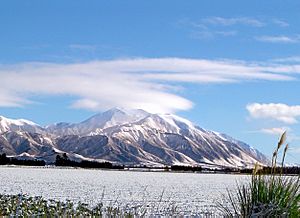 Mount Hutt rises to the west of the Canterbury Plains in the South Island of New Zealand, above the braided upper reaches of the Rakaia River, and 80 kilometres west of Christchurch. Its summit is 2190 metres above sea level.

The mountain is home to a commercial alpine ski area with the largest skiable area in the South Island (3.65 square kilometres), and a vertical height of 683 metres.

It caters for a wide range of skiers, with a "magic carpet" lift for beginners, good intermediate and advanced runs, and access to large off-piste areas. The most advanced runs on the mountain are through the rock formations at the top of the field known as "The Towers", and the South Face. Lift facilities include a high-speed six seater chair, a quad chair, triple chair and magic carpet. The magic carpet is the world's first fully enclosed by shipping containers.

The snow season is from June to October. Mount Hutt prides itself on and historically being the first ski-field in the Southern Hemisphere to open at the beginning of each season. However, its steep thirteen kilometre access road is prone to closure in poor weather, giving the skifield the nickname "Mount Shut." On 12 August 2010, winds of up to 200 km/h struck the ski area, resulting in its closure along with the access road, and stranding 1200 people on the mountain overnight, where they were accommodated in the ski-field's base buildings. The road was reopened the following day.

Since there is no accommodation on the mountain, most visitors stay in the nearby town of Methven, a 35-minute drive to the mountain. The larger town of Ashburton is 55 minutes away. The city of Christchurch is one hour 45 minutes drive away.

Mt Hutt is managed by NZSki along with Coronet Peak and The Remarkables in Queenstown. Mount Hutt was named by the Canterbury Association surveyor Joseph Thomas for John Hutt, an early member of the Association.

During the summer months four species of Alpine grasshoppers can be found within the ski field boundary. They include Sigaus villosus which can be found along the ridgelines, Brachaspis nivalis which lives on the rocky scree, Sigaus australis and Paprides nitidus which both live in the alpine tussocklands.

All content from Kiddle encyclopedia articles (including the article images and facts) can be freely used under Attribution-ShareAlike license, unless stated otherwise. Cite this article:
Mount Hutt Facts for Kids. Kiddle Encyclopedia.