The town of Palmerston, in New Zealand's South Island, lies 50 kilometres to the north of the city of Dunedin. It is the largest town in the Waihemo Ward of the Waitaki District, with a population of 890 residents. Palmerston grew at a major road junction: State Highway 1 links Dunedin and Waikouaiti to the south with Oamaru and Christchurch to the north, while State Highway 85 (known colloquially as "The Pigroot") heads inland to become the principal highway of the Maniototo. The Main South Line railway passes through the town and the Seasider tourist train travels from Dunedin to Palmerston and back once or twice a week. From 1880 until 1989, the town acted as the junction between the main line and a branch line that ran inland, the Dunback and Makareao Branches.

Palmerston stands near the banks of the Shag River, five kilometres inland from the Pacific coast. Between it and the sea stands the lone hill of Puketapu (Maori for sacred hill, known by Southerners as Holy Hill), crowned with a monument to the 19th century Otago politician Sir John McKenzie. An annual race takes place up to the memorial and back, which is called the Kelly's canter, dedicated to Albert Kelly who ran up Puketapu as a constable in the Palmerston police force every day during World War II.

Many people confuse the town of Palmerston with the much more populous North Island city of Palmerston North, whose residents often call their home simply "Palmerston". Otago's town has the earlier claim to the name, however – its surveying dates from 1862, whereas the northern city did not receive its name until 1871. Both towns take their names from Lord Palmerston, the 19th-century British Prime Minister.

The nearby Shag River is named for the cormorant, a sea bird that ventures a little inland, colloquially known as a 'shag'. The river's Maori name, 'Waihemo', has been translated as 'Dwindle River'. It is thought to arise from the river's tendency to reduce in summer to a small stream. Palmerston used to be the capital of the Waihemo County, the surrounding district, before it was amalgamated with the Waitaki District in 1989.

Panorama of the view from Puketapu Cairn overlooking Palmerston

The area is rich in history and legend. Modern archaeology favours a date for the first settlement of New Zealand by Polynesian people about 1150 AD when population was concentrated on the east coast of the South Island. There is a substantial early settlement site of the Archaic or moa hunter phase of Maori culture near Palmerston on the sea coast at the mouth of the Shag River. It has been known to Europeans since the 1840s and was investigated from an early time by archaeologists. In 1987 and 1989 it was very thoroughly re-excavated by a team including Professor Atholl Anderson. It was determined it had been in permanent, year round occupation 'for a period of perhaps 20–50 years in the 14th century AD'. (Anderson and others,1996,p. 67.)

The area is also the traditional site of the wreck of the Arai Te Uru canoe. There are several versions of the tradition but they tell of the arrival of Rakaihautu from the ancestral homeland Hawaiki who met the Kahui Tipua people who were already here. He showed them kumara, or sweet potatoes, and they built canoes including Arai Te Uru to go to Hawaiki and bring back this new and valuable food. However, on its return the vessel became waterlogged off the Waitaki River Mouth, spilled food baskets on Moeraki and Kartigi beaches and was wrecked at Matakaea, Shag Point, where it turned into what is now called Danger Reef. Its steersman, Hipo, sits erect at the stern. After this the crew explored the southern South Island giving many place names. Kahui Tipua are 'ghost or giant people' with mythic or magical attributes, although they are also the real ancestors of people living now. (Anderson, 1983, p. 7.) If the explorers didn't get back before dawn they turned into hills and other natural features. One of them was a woman Puketapu who got as far south as Owaka in South Otago. When she got back to the Waihemo Valley dawn broke and she was turned into the hill Puketapu overlooking Palmerston. 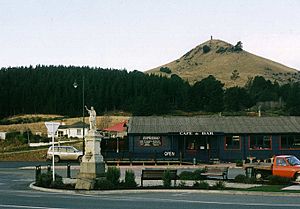 The story is seen as an allegorical explanation of the fact that kumara won't grow south of Banks Peninsula. Arai Te Uru is an ancestral canoe of the Kati Mamoe people who came to the south before Kai Tahu (Ngai Tahu in modern standard Maori) but were preceded by earlier peoples. The Arai Te Uru tradition reflects this with its reference to the preceding Kahui Tipua. It is tempting to identify the occupants of the river mouth archaeological site with the people of Arai Te Uru but that can only be speculation.

In 1814 an open boat from the Matilda, Captain Fowler, under the first mate Robert Brown, with two other Europeans and five lascars, or Indian seamen, came up the east coast past Palmerston and camped for the night ashore north of Moeraki. They were seen and attacked by Maori because of a feud started four years earlier by the theft of a shirt. According to the Creed manuscript, discovered in 2003, two men 'escaped through the darkness of the night & fled as far as Goodwood Bobby's Head' a little south of Palmerston on the coast. They were two days and nights on the way and the Maori people there fed them. However '30 Natives went to the place & massacred them - eat them.' One of the Europeans put up a grim struggle and the mere or club which dispatched him was long remembered. There was a dispute about killing these men after they had been entertained but those bent on vengeance prevailed.

In May 1826 Thomas Shepherd, (1779–1835), passing this coast in the Rosanna, made a sketch of it which still survives in the Mitchell Library, Sydney.

There were European visitors in the 1840s, such as Edward Shortland. Charles Suisted took up land in the area in the 1850s and Palmerston came into existence as a camp site in 1862 as the beginning of a route by the Shag Valley to the Central Otago gold diggings. It was surveyed and named in 1864. There is a handsome Presbyterian Church made of a local sandstone, designed by David Ross in 1876. A marble statue of Zealandia by Carlo Bergamini in the centre of the town is a Boer War memorial.

A few kilometres inland, at the Shag Valley Station, Frank Bell made the first New Zealand to England radio contact on 18 October 1924, an event which attracted international media attention as the first round-the-world radio broadcast.

All content from Kiddle encyclopedia articles (including the article images and facts) can be freely used under Attribution-ShareAlike license, unless stated otherwise. Cite this article:
Palmerston, New Zealand Facts for Kids. Kiddle Encyclopedia.