Kids Encyclopedia Facts
This page is about the Mission in the North Island, New Zealand. For the town in the South Island, see Waimate.

Te Waimate Mission was the fourth mission station established in New Zealand and the first settlement inland from the Bay of Islands. The members of the Church Missionary Society (CMS) appointed to establish Te (the) Waimate Mission at Waimate North were the Rev. William Yate and lay members Richard Davis, George Clarke and James Hamlin. 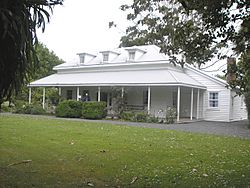 At the instigation of Samuel Marsden, a model farming village for Māori was constructed at Te Waimate by the CMS. Land was bought from the Ngāpuhi tribe following the Girls' War of 1830.

In 1830, Richard Davis, farmer and lay member of the CMS, established a farm at the Waimate Mission.

In 1835 William Williams, Jane and their family move to Waimate, where Williams continued his work on the translation of the Bible into Māori. The boarding school for the sons of the CMS missionaries was also transferred from Paihia to Te Waimate Mission. Richard Taylor succeeded William Williams as principal of the Waimate Boys’ School in September 1839.

The village comprised three wooden houses for missionary families, a flour mill, printery, carpenters' shop, brickworks, blacksmith, school and of course the church. Marsden hoped Māori would be educated into European culture while making Te Waimate Mission a paying proposition by producing goods for sale to European shipping and the local Māori through the Stone Store at Kerikeri. The attempt to impose European culture on Māori in a controlled fashion where those being taught also formed the labour, failed to attract many Māori and the station was gradually run down. 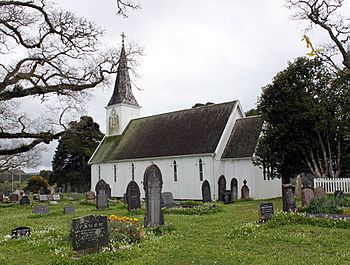 St John the Baptist Church today. Some combatants who died at the Battle of Ohaeawai in 1845 are buried in this churchyard.

The construction of the church at Te Waimate was commenced in May 1831 and it was completed in 6 weeks. The name of the church was chosen as St. John the Baptist day fell on 24 June. The original church also served as a school room.

The first child baptised at the church was Edward Blomfield Clarke on 10 July 1831. The first church wedding of two Europeans in New Zealand was conducted on 11 October 1831, between William Gilbert Puckey (26), son of a CMS carpenter, William Puckey, and Matilda Elizabeth Davis (17), second daughter of the Rev. Richard Davis.

The existing St. John the Baptist Church was built in 1871.

The clergymen appointed to St. John the Baptist Church were:

In 1884 the CMS gave control over the church to the Diocesan Trust Board. 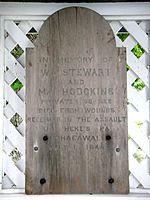 Wooden headstone for two of the British soldiers killed at Ohaeawai, preserved at the mission

During the Flagstaff War soldiers from the 58th and 99th regiments, casualties of the Battle of Ohaeawai (July 1845), were buried in the graveyard of St. John the Baptist Church. The mission station was used as the headquarters for the British army from 15 June 1845 to 6 October 1845, after which the mission lost support among the Māori. The mission station gradually fell into disrepair and the buildings were subsequently put up for sale.

Today the only remnant on the site is the house originally occupied by George Clarke, which is preserved by Heritage New Zealand as a museum. One of the other houses survives at the Butler Point Whaling Museum.

The members of the Church Missionary Society who were appointed to Te Waimate Mission include:

All content from Kiddle encyclopedia articles (including the article images and facts) can be freely used under Attribution-ShareAlike license, unless stated otherwise. Cite this article:
Te Waimate mission Facts for Kids. Kiddle Encyclopedia.