Kaitaia (Māori: Kaitāia) is a town in the Far North District of New Zealand, at the base of the Aupouri Peninsula, about 160 km northwest of Whangarei. It is the last major settlement on State Highway 1. Ahipara Bay, the southern end of Ninety Mile Beach, is 5 km west.

The main industries are forestry and tourism. The population is 6,300 as of June 2020, which makes it the second-largest town in the Far North District, after Kerikeri.

The name Kaitaia means ample food, kai being the Māori word for food.

The Muriwhenua are a group of six northern Māori iwi occupying the northernmost part of the North Island surrounding Kaitaia.

The Kaitaia Mission Station was established between 1833 and 1834 after a series of visits by the Church Missionary Society (CMS) representatives including Samuel Marsden, and at different times, Joseph Matthews and William Gilbert Puckey. Puckey and Matthews had married two sisters, Matilda, and Mary Ann Davis respectively, (daughters of Richard Davis, a lay missioner based at Waimate). They formed a tight band, initially living together in raupo huts, and then in houses they built. As Puckey and the sisters were fluent in Maori, (Puckey having arrived in New Zealand in 1819 with his father, William Puckey, and the Davis family in 1823), they spoke Maori when together, to help Joseph pick up the language. Both families grew, and intermarried, forming the basis of the early Pakeha settler community. At one point, the Church Missionary Society decided that one of the two of Puckey and Matthews should move to a new location to the south to facilitate the spread of the word, but Nōpera Panakareao wrote a heartfelt letter to the CMS committee, pleading not to take away 'one of the two candlesticks'. In February 1841 about 500 Maori were present at a CMS service. In 1852 arguments developed between one chief and his tribe, however the impact of the missionaries meant that the old ways of settling disputes had passed.

Richard Matthews, the brother of Rev. Joseph Matthews, arrived in the Bay of Islands in December 1835 and for a time, joined his brother in Kaitaia. Richard Matthews had been a lay missionary on the second voyage of HMS Beagle with Charles Darwin. Richard Matthews served the CMS as a lay catechist at Kaitaia. In 1838 he married Johanna Blomfield, the sister of Mrs Martha Blomfield Clarke, whose husband George was a CMS missionary at Te Waimate mission. In 1840 Richard and Johanna Matthews helped set up a missionary station at Whanganui.

There were plans to extend the Okaihau Branch railway to Kaitaia and construction was started in the 1920s, but with the line nearly complete to Rangiahua, a review in 1936 determined that the line would not be viable and construction was abandoned. The line terminated in Okaihau until it was closed on 1 November 1987. D 221, a steam tank locomotive, has been on static display at Centennial Park since 1967. 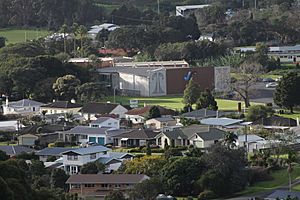 A photograph of the Te Ahu Centre, where the town library, information sites, and InterCity bus stops are.

Kaitaia Airport has services from Auckland and is the only airport in the upper Far North District. Air New Zealand discontinued their services in April 2015. Barrier Air has since taken over services to Auckland.

The avocado industry flourishes, with orchards dispersed throughout the immediate area. Wine is a growing commodity. One of the largest vineyards is the Karikari Estate.

Kaitaia is one of the main centres in the Far North of New Zealand. It is near to popular tourist destinations such as Ahipara and is on State Highway 1 which leads up to Cape Reinga. The town's slogan is "Where journeys begin".

The Aupouri Forest, to the North of Kaitaia, provides pine logs which are processed at the Juken Nissho Mill in Kaitaia.

Wine is a growing commodity. One of the largest vineyards in the area is the Karikari Estate.

The percentage of people born overseas was 9.6, compared with 27.1% nationally.

Kaitaia Primary School, Kaitaia Intermediate and Kaitaia College are the main primary, intermediate and secondary schools. The rolls are 312, 206, and 906, respectively.

Pompallier School is a Catholic full primary (years 1-8) school with a roll of 134,

Kaitaia Abundant Life School is a Christian composite school (years 1-13) with a roll of 225, It was established in 1988 as a private primary school, and extended to secondary students in 1992. It became a state integrated school in 1996.

Oturu School is a primary school to the north east serving years 1-8, with a roll of 142,

All these schools are co-educational. Rolls are as of July 2016.

NorthTec polytechnic also has a campus in Kaitaia.

Notable people who have lived in Kaitaia:

All content from Kiddle encyclopedia articles (including the article images and facts) can be freely used under Attribution-ShareAlike license, unless stated otherwise. Cite this article:
Kaitaia Facts for Kids. Kiddle Encyclopedia.