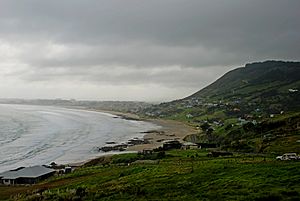 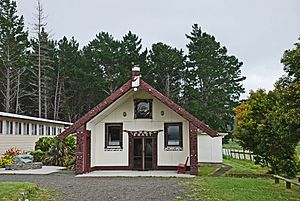 Ahipara is a town and locality in Northland, New Zealand at the southern end of Ninety Mile Beach, with the Tauroa Peninsula to the west and Herekino Forest to the east. Ahipara Bay is to the north west. Kaitaia is 14 km to the north east, and Pukepoto is between the two.

The name comes from the Māori language words ahi, meaning fire, and para, a large fern, and can be translated as "a fire at which para was cooked". Prior to the late 18th century, the area was called Wharo, which means "stretched out". That name originated when the chief Tohe ordered a slave to measure the distance the tide had receded, by counting the number of arm-spans from the high water level.

The area was popular with kauri gum-diggers during the late 19th and early 20th centuries. The Ahipara Gumfields Historic Reserve is to the south of the town.

Shipwreck Bay (Te Kōhanga in Māori), at the southern point of Ahipara Bay, contains a number of wrecks visible at low tide.

Ahipara Bay was once well known for its toheroa shellfish, but gathering these is restricted due to their near-extinction. Both Ahipara and Shipwreck Bays are popular surfing spots.

All content from Kiddle encyclopedia articles (including the article images and facts) can be freely used under Attribution-ShareAlike license, unless stated otherwise. Cite this article:
Ahipara Facts for Kids. Kiddle Encyclopedia.