The Far North District is the northernmost territorial authority district of New Zealand, consisting of the northern part of the Northland Peninsula in the North Island. It stretches from North Cape and Cape Reinga / Te Rerenga Wairua in the north, down to the Bay of Islands, the Hokianga and the town of Kaikohe.

The Far North District Council is based in Kaikohe, and has nine ward councillors representing three wards: Te Hiku (in the north), Kaikohe/Hokianga (in the west), Bay of Islands/Whangaroa (in the east). The council is led by the current mayor of Far North, John Carter, who entered the role in 2013. 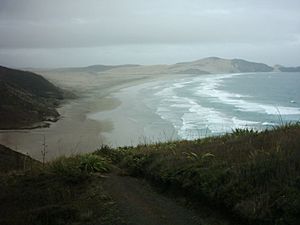 The Far North, while generally a pleasant climate, can also be affected by the sometimes stormy maritime weather of the country, especially at places like Cape Reinga.

The Far North District is the largest of three territorial authorities making up the Northland Region. The district stretches from the capes and bays at the northern tip of the Aupouri Peninsula past Ninety Mile Beach to the main body of the North Auckland Peninsula, where it encompasses both the Bay of Islands and Hokianga.

It borders on the Kaipara and Whangarei Districts, which are the other two territorial authorities in the Northland Region.

The northernmost town in the district is Kaitaia. There is a cluster of towns on the east coast around the Bay of Islands, (Kerikeri, Paihia, Russell, Opua, Kawakawa and Moerewa), the town of Kaikohe centrally situated to the west of them, and a cluster of small settlements on the west coast surrounding the Hokianga Harbour (Omapere, Opononi, Rawene, Panguru, Kohukohu, and Horeke).

The district has 62,000 people (June 2016), of whom 40 percent are Māori. Over the last 10 years the district's population has defied national (and worldwide) trends by becoming increasingly rural. The largest town is Kerikeri with a population of 6507, followed by Kaitaia with 4887, and Kaikohe, the seat of the District Council, with 3915.

All content from Kiddle encyclopedia articles (including the article images and facts) can be freely used under Attribution-ShareAlike license, unless stated otherwise. Cite this article:
Far North District Facts for Kids. Kiddle Encyclopedia.