Kohukohu is a village on the Hokianga Harbour in the Northland Region of New Zealand. It was one of the first European settlements in New Zealand.

Kohukohu is situated on the northern shore of the harbour where it splits into two rivers, the Mangamuka River branching inland to the northeast and the Waihou River leading towards the east past Mangungu, Horeke and Rangiahua.

Where the harbour divides there is a small island called Motiti which was painted by Augustus Earle, the first European artist to spend several months in New Zealand, during his visit to the Hokianga in 1827. He wrote "we were sailing up a spacious sheet of water, which became considerably wider after entering it; while majestic hills rose on each side .... looking up the river we beheld various headlands stretching into the water and gradually contracting its width, 'till they became fainter and fainter in the distance and all was lost in the azure of the horizon".

Kohukohu is part of the Kohukohu-Broadwood statistical area. For demographics of this area, see Broadwood, New Zealand. 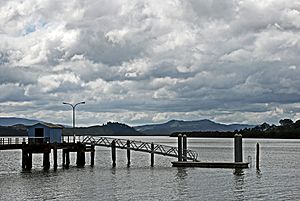 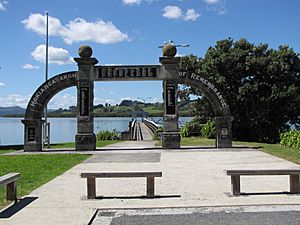 Hokianga Arch of Remembrance at Kohukohu

According to Te Tai Tokerau tradition, the legendary Polynesian explorer, Kupe visited the area in 925 AD prior to his return voyage to Hawaiiki. Angry at the food from the hangi (earth oven) being insufficiently cooked, he cursed those responsible using the word kohu. Hence Kohukohu.

The first recorded European to enter the Hokianga Harbour arrived in 1819 and by the 1830s, Kohukohu was the heart of New Zealand's timber industry. The country's first Catholic mass was celebrated 8 kilometres north of Kohukohu at Totara Point in 1838.

For nearly one hundred years Kohukohu was an important timber milling town and the largest commercial centre on the north of the harbour. In 1900, the township had a population of almost 2,000 people. 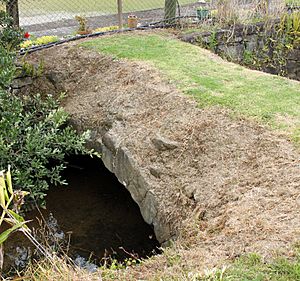 The historic Kohukohu footbridge built in the 1840s

Today, Kohukohu is a community of 150 people who live within the village and approximately 350 who live in the surrounding area. The smaller settlements of Tauteihiihi, Motukaraka, Pikiparia, Te Karae, Mata, and Paponga are very close by. Kohukohu has a school, general store, café, art galleries, arts and crafts shop, hotel, voluntary fire and ambulance services, and a health clinic. There are also two churches and three Marae within the locality.

The Kohukohu footbridge in the centre of the town was built of Sydney sandstone some time in the 1840s, was the first stone bridge in the country, and is the oldest bridge of any construction still in existence in New Zealand. It was sited at the mouth of the Waihouuru Creek where it flowed into the Hokianga Harbour at that time. The harbour foreshore is today about 100 meters from the bridge.

In recent years, Kohukohu has become an increasingly popular destination for travellers who are attracted by its beautiful scenery, history, culture and arts. There are a number of accommodation options available locally; including backpackers, cottages, and bed & breakfast facilities.

Kohukohu School is a co-educational full primary (years 1-8) school with a roll of 50 students as of July 2016.

All content from Kiddle encyclopedia articles (including the article images and facts) can be freely used under Attribution-ShareAlike license, unless stated otherwise. Cite this article:
Kohukohu, New Zealand Facts for Kids. Kiddle Encyclopedia.