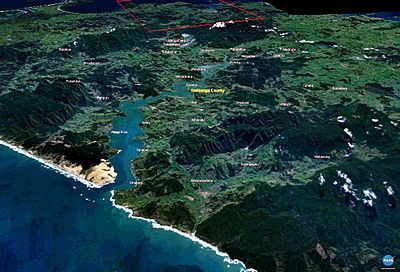 Image of the Hokianga generated by NASA's World Wind program

The Hokianga is an area surrounding the Hokianga Harbour, also known as the Hokianga River, a long estuarine drowned valley on the west coast in the north of the North Island of New Zealand.

The original name still used by local Māori is Te Kohanga o Te Tai Tokerau ("the nest of the northern people") or Te Puna o Te Ao Marama ("the wellspring of moonlight"). The full name of the Harbour is Te Hokianga-nui-a-Kupe – "the place of Kupe's great return".

The Hokianga is in the Far North District, which is in the Northland Region, and is 120 kilometres northwest of Whangarei and 40 kilometres west of Kaikohe by road. The estuary extends inland for 30 kilometres from the Tasman Sea. It is navigable for small craft for much of its length, although there is a bar across the mouth.

Twelve thousand years ago Hokianga was a river valley flanked by steep bush-clad hills. As the last ice age regressed, the dramatic rise in sea level slowly flooded the valley turning it into a tidal, saltwater, harbour with abundant sheltered deep water anchorages. This was the harbour that Kupe left from, and in 1822 saw the first European timber entrepreneurs. Southern Right Whales possibly frequented in the bay historically prior to significant depletion of the species caused by commercial and illegal hunts including mass illegal slaughters by Soviet Union with helps from Japan in 1960s to 80s. Today, large whales are rarely seen in the bay while smaller dolphins and Killer Whales are more common in the harbor water, as the harbour is one of well-regarded areas to watch them from shores.

The area around the harbour is divided in three by the estuary. To the south are the settlements of Waimamaku, Omapere, Opononi, Pakanae, Koutu, Whirinaki, Rawene, Waima, and Taheke; to the north are Broadwood, Pawarenga, Panguru, Mitimiti, and Rangi Point; and at the top of the harbour upstream from the narrows are Horeke, Kohukohu and Mangamuka. 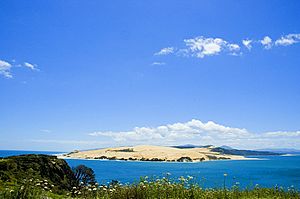 According to Te Tai Tokerau tradition, Kupe, the legendary Polynesian navigator and explorer, settled in Hokianga in approximately 925 AD, after his journey of discovery from Hawaiiki aboard the waka (canoe) named Matahorua. When Kupe left Hokianga he declared that this would be the place of his return and left several things behind including the bailer of his canoe. Later, Kupe's grandson Nukutawhiti returned from Hawaiiki to settle in Hokianga.

In the 14th century the great chief Puhi landed just south of the Bay of Islands. The tribe of Puhi, Ngāpuhi, slowly extended westwards to reach the west coast and to colonise both sides of Hokianga. Māori regard Hokianga as one of the oldest settlements in Aotearoa, and it remains a heartland for the people. Rahiri, the 17th-century founder of the Ngāpuhi iwi, was born at Whiria pa to the south of the harbour, where a monument stands to his memory.

In the course of expansion the Ngāpuhi created and maintained over centuries a complex network of walking tracks, many of which evolved into today's roads. Wesleyan and later Anglican missionaries were guided along these ancient routes to make their own discovery of Hokianga and its accessible timber resources. Their reports soon reached merchant captains in the Bay of Islands.

Captain James Herd of the Providence responded first, and with disgraced missionary Thomas Kendall as guide and translator, crossed the bar and entered the harbour in 1822 (the first European ship to do so) and sailed away with the first Hokianga timber shipment. His success inspired a strong following—the deforestation of Hokianga had begun and would be completed by the turn of the century.

The only disincentive to Hokianga's exploitation was the harbour bar. Of the hundreds of ships that successfully negotiated it, the records show that 16 were lost. Most came to grief when leaving fully laden and became caught in the wind shadow cast by South Head where the deep water lay. A temporary lull or change in wind direction could cause a sailing-ship to lose steerage way and be swept onto the rocky shore.

In 1828 the missionary schooner Herald, built by Henry Williams and sailed by Gilbert Mair foundered while trying to enter Hokianga Harbour.

The last recorded shipwreck involved the schooner Isabella de Fraine, lost with all eight crew in July 1928 after capsizing on the bar at the entrance to the harbour.

In 1837 a French commoner with delusions of being an aristocrat, self-titled "Baron" Charles de Thierry, sailed with 60 settlers into this hive of export activity to claim an immense tract of land that he believed he had purchased (for 36 axes) 15 years earlier. He was eventually granted about 1,000 acres (4 km²) at Rangiahua where he set up his colony, declaring himself 'Sovereign Chief of New Zealand', a title that failed to endear him to Ngāpuhi. His project collapsed and he left behind him a few ancient fruit trees and a lot of gouty DNA. His visit at least inspired the Colonial Service to get on with a treaty in the face of this implied Gallic threat.

The year after de Thierry arrived another French connection, Bishop Jean Baptiste Pompallier, sailed in to establish a Catholic mission. He found the southern shores firmly in the hands of Methodist and Anglican missionaries, but the northern side was ripe for conversion. His remains, recently claimed by Ngāpuhi, lie buried where the mission began. Today the harbour, like the Reformation, stands between Protestant and Catholic. 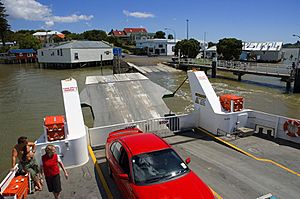 The communities of Horeke and Rawene are the second- and third-oldest European settlements in New Zealand. Rawene is still the most important of the coastal settlements in the Hokianga and is where the base of Hokianga's community owned health services (Hauora Hokianga) is located, on top of the hill at the Hokianga Hospital.

Within six days of the Waitangi signing, Governor Hobson, keen to secure full Ngāpuhi support, trekked across to the Mangungu Mission House near Horeke where 3000 were waiting. The second signing of the Treaty of Waitangi took place on 12 February 1840. With the appropriate signatures (and a few inappropriate entries) Hobson could immediately claim support from the biggest tribe in the country.

While the fate of the country was being signed into history, the axemen of Hokianga scarcely missed a beat. At any one time, as many as 20 ships could be loading Hokianga timber. Whole hillsides, suddenly bared of vegetation, began to slip into the harbour, choking its tributaries with mud.

The relationship between Māori and Pākehā (European) settlers was frequently tense, never more so than during the Dog Tax War of the 1890s, which largely centred around Hokianga.

By 1900, the bulk of the forest had sailed over the bar and the little topsoil that remained was turned to dairy farming for butter production.

Most of the cream delivered to the Motukaraka Dairy Factory was carried there by a fleet of about fifty locally-built launches which criss-crossed the harbour daily, creating in the process a service for both passengers and freight. For half a century, the communities on both sides of the harbour were linked internally by sea transport, before improved roads in the 1950s finally displaced this energetic flotilla and the harbour once again divided the community.

By 1914, a rustic telephone system linked some of the Hokianga communities with each other and with the outside world. A government-subsidised, weekly coastal shipping service ran between Onehunga and Hokianga, bringing in freight and taking away butter.

The influenza pandemic reached Hokianga in September 1918, and remote Waiotemarama was one of the first settlements to succumb. A soup kitchen was organised in each community. Mounted and armed guards stood at all crossroads to turn back would-be visitors and thus restrict the spread of the disease between settlements. Travellers wishing to enter Hokianga were simply stopped at the boundary. The rule was simple: anyone could leave, but no one could enter.

The local epidemic lasted six weeks and a significant number died. Each community attended to its own, and mass burials were commonplace. Few Maori deaths were recorded – the true impact of the epidemic on Maori is unknown.

Two iconic and very different figures in New Zealand history have been closely associated with the Hokianga.

Dame Whina Cooper was born at Te Karaka, Hokianga on 9 December 1895, the daughter of a leader of the Te Rarawa iwi.

From an early age she showed an interest in local community affairs and politics, and her flair and abilities led to her becoming the undisputed Māori leader of the northern Hokianga by her mid-30s.

In 1949 she moved to Auckland, and by 1951 she was elected first president of the new Māori Women’s Welfare League. The league’s success was largely due to Whina’s efforts, and she became well known throughout the country. In 1957 she stepped down as president and the annual conference rewarded her with the title Te Whaea o te Motu ("Mother of the Nation").

Whina Cooper continued to work for the community throughout the 1960s, but it was her 1975 leadership of a hikoi – a symbolic march – to protest against the loss of Māori land for which she is best remembered. The march, from the northern tip of the North Island to Parliament in Wellington at the other end of the island made her nationally recognised, with her determined figure, no longer strong in body but strong in mana and will, walking at the head of the march from Te Hapua to Wellington.

Opononi became famous throughout New Zealand during 1955 and 1956 due to the exploits of a bottlenose dolphin (nicknamed "Opo"). Opo was a wild dolphin who started following fishing boats around Opononi in early 1955 after her mother had been killed, and would swim daily in the bay close to town. She was originally named "Opononi Jack", based on Pelorus Jack, since she was presumed to be male. Unlike the majority of dolphins, she had no qualms about human company, and would perform stunts for locals, play with objects like beach balls and beer bottles, and allow children to swim alongside her and make contact.

The dolphin became a local celebrity but news of her soon spread, and visitors from throughout the country would come to watch her. On 8 March 1956 official protection for Opo, requested by locals, was made law, but on 9 March she was found dead in a rock crevice at Koutu Point. It is suspected that she was killed accidentally by fishermen fishing with gelignite. Her death was reported nationwide, and she was buried with full Māori honours in a special plot next to the town hall.

All content from Kiddle encyclopedia articles (including the article images and facts) can be freely used under Attribution-ShareAlike license, unless stated otherwise. Cite this article:
Hokianga Facts for Kids. Kiddle Encyclopedia.