Kaikohe is a town in the Far North District of New Zealand, situated on State Highway 12 about 260 km from Auckland. It is the largest inland town and highest community above sea level in the Northland Region. With a population of just under 4000 people it is a shopping and service centre for an extensive farming district and is sometimes referred to as "the hub of the north"

The town is situated on a relatively level site surrounded mainly by undulating plains and is nearby many former pā sites including Nga Huha, Pouerua, Te Rua-hoanga, Ngaungau, Kaiaia, Te Tou o Roro, Taka-poruruku, Tapa-huarau, Nga Puke-pango, Maunga-turoto, and Maunga-kawakawa. On the western edge of town, Kaikohe Hill rises 300 m above sea level, allowing views of the imposing sand dunes on the Hokianga Harbour to the west, farmlands to the east and south toward Mount Hikurangi (625 m).

To the north of the Putahi volcanic ridge is Lake Omapere, five km in length, but only two to three metres deep. Around five km to the east is the small village of Ngawha Springs, where hot water springs rise to the surface from the Ngawha geothermal field, and where the Northland Region Corrections Facility is situated.

There are several volcanic scoria cones in the area, which are part of the Kaikohe-Bay of Islands volcanic field.

Originally a Māori village called Opango, Kaikohe is recognised as being the very heart of the culture of the great Ngāpuhi iwi. In the early 19th century a rival Māori tribe raided the village and fugitives subsisted among the Kohekohe (a native tree) groves on Tokareireia (Kaikohe Hill). After the incident, the village became known as Kaikohekohe (kai meaning food) but was later shortened to Kaikohe.

Battles during the Flagstaff War (also known as 'Hone Heke's Rebellion') were fought around Kaikohe: at Hone Heke's Pā at Puketutu on the shores of Lake Omapere; followed by a battle at Te Ahuahu; with the warriors of Te Ruki Kawiti fighting the Battle of Ohaeawai. St. Michael's Anglican Church in nearby Ngawha Springs was built on the site of the pā at which the battle took place. The warrior chief Hone Heke settled in Kaikohe after fighting ceased, and died there in 1850. His grand-nephew Hone Heke Ngapua, MP for Northern Maori, also lived in Kaikohe. In April 1911, a monument to him was unveiled on Kaikohe Hill by Sir Tui Carroll, acting Prime Minister. A park in the town is dedicated to Rawiri Taiwhanga who has a very strong claim to being New Zealand's first commercial dairy farmer. He milked a herd of cows and sold butter in 1834. 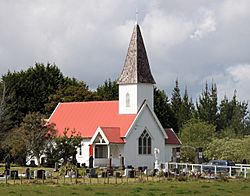 The Aperahama Church, named after Aperahama Te Awa who is buried in the churchyard.

To the west of the town is the Aperahama Anglican Church, named after Aperahama Te Awa. It was opened in 1885, a year after his death, and he is buried in the churchyard. It is on the site of an earlier church, built in 1837, and the existing memorial gates were erected and dedicated for that earlier church. The building is registered as a place ".... of special or outstanding historical or cultural heritage significance or value...." by Heritage New Zealand.

Also in the town is a Pioneer Village, a 19th-century Northland community recreated with all its colourful atmosphere, history and detail.

Kaikohe was linked to the national rail network with the arrival of a branch line railway being built from Otiria on the North Auckland Line to Kaitaia, which opened to Kaikohe on 1 May 1914. The line continued north to Okaihau, opening on 29 October 1923 and eventually reached Rangiahua, although the section between Okaihau and Rangiahua was never handed over to the New Zealand Railways Department for operation and the line never reached Kaitaia. The line between Okaihau and Rangiahua was operated for a short time by the Public Works Department before being closed and dismantled during World War II. The railway through Kaikohe thus became known as the Okaihau Branch.

Although Kaikohe became the service centre of the Far North, it failed to generate much rail traffic in the early years of the line. During the first ten months of existence, just 1,500 tons of inbound freight was carried, with roughly half that carried outbound, and the decline continued to the point where in 1918 Kaikohe lost its stationmaster. Minimal services were offered, and although losses increased up to 1930, fortunes had somewhat improved by 1940, and by 1950 there was sufficient traffic to justify six trains each way a week. Two carried only freight, while four were mixed goods/passenger trains. At that time, a full complement of staff was again employed at Kaikohe.

When railcars were introduced on services north of Auckland in November 1956, they ran through Kaikohe all the way to Okaihau. Previously, a carriage train known as the Northland Express had run from Auckland to Opua with connections to Kaikohe and Okaihau via the mixed trains, but with the change of the northern terminus to Okaihau, the branch increased in importance. This proved to be short-lived; in July 1967 the very popular railcar service was withdrawn due to mechanical problems plaguing the railcars. Passengers had to use the mixed trains, with significantly older rolling stock on a slower schedule. Demand decreased and the branch closed to passengers on 21 June 1976.

In 1977, a relaxation of road transport laws led to a decline in freight traffic on the line and forestry proposals that would have required a railway service failed to eventuate. Scheduled trains were cancelled beyond Kaikohe on 12 August 1983, and for a little over four years the line was shunted when required. The branch closed on 1 November 1987 and the track has been lifted. The rail corridor through Kaikohe is still owned by the New Zealand Railways Corporation, being retained in case any forestry proposals come to fruition and the railway is again required, although it now forms part of the Twin Coast Cycle Trail.

Kaikohe is the geographical centre of the Far North. Within a 50 km radius are the famous Bay of Islands and the Waipoua, Puketi and Omahuta kauri forests. Also not far away are the Whangaroa and Hokianga harbours, the Waiomio limestone caves, many beautiful beaches and secluded bays, and historic Kerikeri which is Northland's largest town. It is also the home of the Kaikohe Demolition Derby which featured in the "Kaikohe Demolition" movie filmed by Florian Habicht.

All content from Kiddle encyclopedia articles (including the article images and facts) can be freely used under Attribution-ShareAlike license, unless stated otherwise. Cite this article:
Kaikohe Facts for Kids. Kiddle Encyclopedia.