Aotearoa, originally used in reference to the North Island of New Zealand, is now the most widely known and accepted Māori name for the entire country. It is often pronounced by English speakers, and is becoming widespread in the bilingual names of national organisations and institutions. Since the 1990s it has been the custom to sing New Zealand's national anthem, "God Defend New Zealand", in both Māori and English, exposing the term Aotearoa to a wider audience. 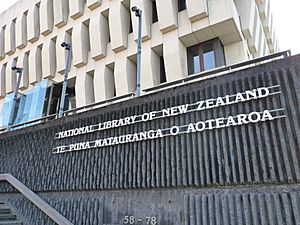 A bilingual sign outside the National Library of New Zealand uses Aotearoa alongside New Zealand.

The original derivation of Aotearoa is not known. The word can be broken up as: ao = cloud, dawn, daytime or world, tea = white, clear or bright and roa = long. It can also be broken up as Aotea = the name of one of the migratory waka that travelled to New Zealand, or the Large Magellanic Cloud, and roa = long. The common translation is "the land of the long white cloud". Alternative translations are ‘long bright world’ or ‘land of abiding day’ referring to the length and quality of the New Zealand daylight (when compared to the shorter days found further north in Polynesia).

In some traditional stories, Aotearoa was the name of the canoe of the explorer Kupe, and he named the land after it. Kupe's wife (in some versions, his daughter) was watching the horizon and called "He ao! He ao!" ("a cloud! a cloud!"). Other versions say the canoe was guided by a long white cloud in the course of the day and by a long bright cloud at night. On arrival, the sign of land to Kupe’s crew was the long cloud hanging over it. The cloud caught Kupe’s attention and he said “Surely is a point of land”. Because of the cloud which greeted them, Kupe named the land Aotearoa. Aotearoa can also be broken up as: aotea-roa. Aotea is the name of one of the Māori migration canoes. The first land sighted was accordingly named Aotea (Cloud), now Great Barrier Island. When a much larger landmass was found beyond Aotea, it was called Aotea-roa (Long Aotea).

When Māori began incorporating the name Aotearoa into their lore is unknown. From 1845, George Grey, Governor of New Zealand, spent some years amassing information from Māori regarding their legends and histories. He translated it into English, and in 1855 published a book called Polynesian Mythology And Ancient Traditional History Of The New Zealand Race. In a reference to Maui, the culture hero, Grey's translation of the Māori read as follows:

In the 19th century, Aotearoa was sometimes used to refer to the North Island only. An example of that usage appeared in the first issue of Huia Tangata Kotahi, a Māori language newspaper published on 8 February 1893. It contained the dedication on the front page, "He perehi tenei mo nga iwi Maori, katoa, o Aotearoa, mete Waipounamu", meaning "This is a publication for the Māori tribes of Aotearoa and the South Island.

The widely used name for the North Island is Te Ika a Māui, The fish of Māui. The South Island was called Te Wai Pounamu, The Waters Of Greenstone, or Te Wāhi Pounamu, The Place Of Greenstone. In early European maps of New Zealand, such as those of Captain James Cook, garbled versions of these names are used to refer to the two islands (often spelt Aheinomauwe and Tovypoenammoo).

After the adoption of the name New Zealand by Europeans, one name used by Māori to denote the country as a whole was Niu Tireni, a transliteration of New Zealand. When Abel Tasman reached New Zealand in 1642, he named it Staten Landt, believing it to be part of the land Jacob Le Maire had discovered in 1616 off the coast of Argentina. Staten Landt appeared on Tasman's first maps of New Zealand, but this was changed by Dutch cartographers to Nova Zelandia in 1645, referring to the Dutch province of Zeeland, after Hendrik Brouwer proved the South American land to be an island (1643). The Latin Nova Zelandia became Nieuw Zeeland in Dutch. Captain James Cook subsequently called the islands New Zealand. It seems logical that he simply applied English usage to the Dutch naming, but it has also been suggested he was possibly confusing Zeeland with the Danish island of Zealand.

In 2015 the New Zealand national cricket team played under the name of Aotearoa for their first match against Zimbabwe to celebrate Māori Language Week.

All content from Kiddle encyclopedia articles (including the article images and facts) can be freely used under Attribution-ShareAlike license, unless stated otherwise. Cite this article:
Aotearoa Facts for Kids. Kiddle Encyclopedia.