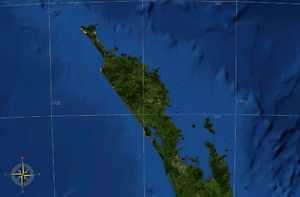 The Northland Peninsula stretches from the Auckland isthmus to the northern tip of New Zealand's North Island.

The peninsula stretches northwest for about 330 kilometres from the Auckland isthmus (or Tamaki isthmus), reaching a maximum width of 85 kilometres. It has a convoluted coastline, with many smaller peninsulas branching off it.

The Kaipara Harbour part way up the peninsula's western (Tasman Sea) shore is one of the largest harbours in the world, stretching some 65 kilometres from north to south. Further north is the smaller Hokianga harbour, which is of historic and cultural significance, especially to the Māori people. Another historically significant site is Waitangi and the surrounding Bay of Islands. This was a major settlement in early colonial New Zealand, and was the site of the first signing of the Treaty of Waitangi, which is seen as the founding document of New Zealand's nationhood.

The largest settlement on the peninsula (other than parts of the Auckland conurbation) is Whangarei, on a harbour opening on the Pacific Ocean close to the peninsula's widest point.

All content from Kiddle encyclopedia articles (including the article images and facts) can be freely used under Attribution-ShareAlike license, unless stated otherwise. Cite this article:
Northland Peninsula Facts for Kids. Kiddle Encyclopedia.