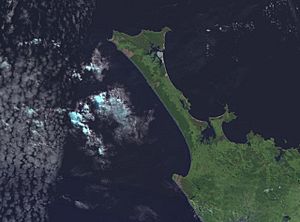 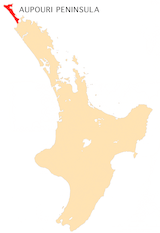 The Aupouri Peninsula is a tombolo at the northern tip of the North Island of New Zealand. It projects between the Tasman Sea to the west and the Pacific Ocean to the east. It constitutes the northern part of the Far North District, incorporating North Cape, Houhora and the northern half of Awanui.

At the base of the peninsula to the east is the natural inlet of the Rangaunu Harbour. Beyond this lies the Karikari Peninsula and the broad sweep of Doubtless Bay. The east coast of the peninsula is dominated by Rangaunu Bay in the south and Great Exhibition Bay in the north. Towards its northern tip is the natural inlet of Parengarenga Harbour, beyond which lies North Cape. Spirits Bay and Tom Bowling Bay are located on northernmost of the land.

The peninsula's best-known feature is on the other coast: almost the entire west coast is the 88-kilometre long Ninety Mile Beach.

At its northern end, the peninsula widens to 30 kilometres. Here there are several capes that appear to be the northernmost point of New Zealand's main islands: Cape Maria van Diemen, North Cape, Cape Reinga, and the Surville Cliffs, which is the actual northernmost point by a few hundred metres, at latitude 34° 23' 47" South. Only a handful of islands in the Three Kings and Kermadec chains lie further north in New Zealand.

Although there are a number of settlements with over 100 people, including Te Hapua, Te Kao, Pukenui and Kaimaumau, the peninsula is sparsely inhabited, with a population of approximately 3,900. For this reason, the area's roads are largely only metalled rather than being sealed. The main road (State Highway 1) is sealed, the final section completed in April 2010. Ninety Mile Beach is a designated highway, but most rental contracts include it in "prohibited roads". The nearest town to the capes at the tip of the peninsula is Kaitaia, 100 kilometres to the south.

It is named after Te Aupōuri, one of the Māori tribes that inhabits it.

The 2018 New Zealand census uses two statistical areas to cover the peninsula: North Cape, which it defines as covering the peninsula from Houhora Heads northwards, and Rangaunu Harbour, which goes as far south as Awanui.

The percentage of people born overseas was 7.8, compared with 27.1% nationally.

Although some people objected to giving their religion, 39.4% had no religion, 38.6% were Christian, and 13.5% had other religions.

The Aupouri Aquifer extends along the whole length of Ninety Mile Beach, and includes lowlying land between Waimanoni and Ahipara, covering a total land area of 75,322 hectares. Groundwater levels are monitored and water allocation limits are set by Northland Regional Council. Resource consents for water takes include conditions for monitoring bores to observe water levels and any saltwater intrusion.

There are a number of small lakes in the Aupouri Peninsula, such as Lake Waiparera, Lake Heather, Lake Ngatu, and Lake Rotoroa. There is a possibility to use these as "window lakes" presenting an extension of the groundwater table ("window lakes" would be affected by groundwater pumping due to the direct hydraulically connection with the aquifer), there is however, little data available on which to base a conclusion.

Use of the aquifer for the avocado industry has caused concerns for the public regarding water security for local communities, and the potential environmental impact on the nearby Kaimaumau wetland.

All content from Kiddle encyclopedia articles (including the article images and facts) can be freely used under Attribution-ShareAlike license, unless stated otherwise. Cite this article:
Aupouri Peninsula Facts for Kids. Kiddle Encyclopedia.