Kawakawa is a small town in the Northland Region of northern New Zealand. It had a population of 1347 at the 2006 census, down from 1401 in 2001. Kawakawa developed as a service town when coal was found in the area in 1864, but there is no longer coal mining here. The economy is based on farming.

The town is known as "Train Town", because the Bay of Islands Vintage Railway runs down the middle of its main street on the way to Opua. 8 km of the 17 km track reopened in 2008. At present trains are unable to go over "Long Bridge" because it is being re-piled, and the track between this bridge at Taumarere and Opua is being used as part of the Twin Coast Cyclepath. As soon as re-piling has been completed and the bridge certified for train use, this part of the track will be refurbished and the cyclepath moved next to the track. 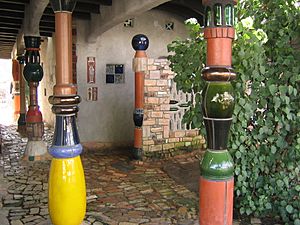 Entrance to the Hundertwasser toilet building

The town is also famous for its Hundertwasser toilet block, designed by Austrian artist Friedensreich Hundertwasser, who was a resident of the town from 1975 until his death in 2000. Another attraction is the nearby Kawiti glowworm Caves at Waiomio.

All content from Kiddle encyclopedia articles (including the article images and facts) can be freely used under Attribution-ShareAlike license, unless stated otherwise. Cite this article:
Kawakawa, New Zealand Facts for Kids. Kiddle Encyclopedia.