The Kaipara District is located in the Northland Region in northern New Zealand. 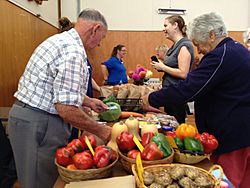 Maungaturoto Markets are held on the 1st Friday of the month.

Kaipara District is located in the rolling hills around the northern shores of the Kaipara Harbour, a large natural harbour open to the Tasman Sea. Kaipara District Council shares management of the harbour with various other organisations, most notably Northland Regional Council (in the north) and Auckland Council to the south.

The roughly triangular district stretches from a thinning of the Northland Peninsula south of Kaiwaka and Mangawhai in the southeast to the Waipoua Forest in the northwest. The District's western boundary is defined by Ripiro Beach which stretches down Northland’s west coast from Maunganui Bluff and the Waipoua Forest in the North, to Pouto at the entrance to the Kaipara Harbour. The region is bisected by the Northern Wairoa River and its tributaries, which flow into the northern end of the Kaipara Harbour.

The District has no major urban centre but does have numerous towns and villages including Dargaville (the primary service centre in the west), Ruawai, Matakohe, Paparoa, Maungaturoto, Kaiwaka, Mangawhai, Tinopai, Te Kopuru, Kaihu, Pahi and Whakapirau as well as the rural area which surrounds them. It has a population of 21,700 (June 2016), of whom about 4450 live in Dargaville, the seat of the district council.

The population is largely rural, living in small settlements scattered amongst the rolling hills or nestled on the shores of the harbour, including the harbour villages of Tinopai, Pahi and Whakapirau. The area around Dargaville is noted for the high proportion of residents of Dalmatian descent and has an active Dalmatian Club.

The nearest city is Whangarei, 45 kilometres northeast of Dargaville.

Community spirit is strong among the various rural communities, as is evident by the numerous local clubs, volunteer organisations and other initiatives. Dargaville has an annual Arts and Crafts Festival run by the local Rotary club and also features weekly Riverside Produce Markets on Thursday afternoons. Maungaturoto has a monthly market on a Friday from 4pm to 7pm at the Maungaturoto Hall and also has a volunteer group (Maungaturoto Residents Association) dedicated to beautifying the town. A similar volunteer group also exists in Ruawai and Paparoa (Progressive Paparoa).

All content from Kiddle encyclopedia articles (including the article images and facts) can be freely used under Attribution-ShareAlike license, unless stated otherwise. Cite this article:
Kaipara District Facts for Kids. Kiddle Encyclopedia.