Dargaville (Māori: Takiwira) is a town in the North Island of New Zealand. It is situated on the bank of the Northern Wairoa River in the Northland region. The town is located 55 kilometres southwest of Whangarei.

It is noted for the high proportion of residents of Croatian descent. The area around it is one of the chief regions in the country for cultivating kumara (sweet potato) and so Dargaville is known by many locals as the Kumara Capital of New Zealand. 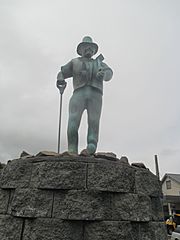 The town takes its name after timber merchant and politician Joseph Dargaville (1837–1896). Founded during the 19th-century kauri gum and timber trade, it briefly had New Zealand's largest population.

The area became known for a thriving industry that included gum digging and kauri logging, which was based mainly at Te Kopuru, several kilometres south of Dargaville on the banks of the Northern Wairoa river. The river was used to transport the huge logs downstream to shipbuilders and as a primary means of transport to Auckland. 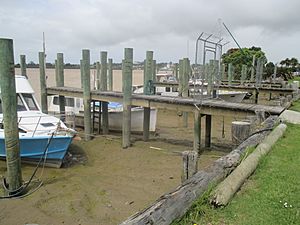 Dargaville also has the longest unbroken stretches of sand beach in New Zealand, and is largely drivable from one end to the other. This beach is home of the famous local shellfish delicacy called the toheroa, which was over-harvested in the 1950s and 1960s causing the population of the shellfish to decline enough that public gathering of the shellfish is now prohibited.

Dargaville is also the gateway to the Waipoua Forest, a protected national park and home of the biggest specimens of Kauri tree in New Zealand, Tane Mahuta (Māori, meaning "Lord of the Forest") being chief amongst them.

Dargaville is situated by the Wairoa River, with boat moorings adjacent to the city center. The river is tidal when it passes through Dargaville. 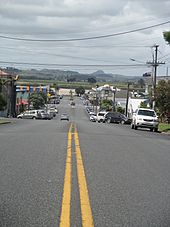 Hokianga Road, one of the main roads in Dargaville township

Dargaville is on the junction of State Highways 12 and 14.

North of the town, the Donnelly's Crossing Section railway was established to provide access to other logging activities. The first portion of this line was opened in 1889, it reached its greatest extent in 1923, and after operating isolated from the national rail network for decades, it was connected with the North Auckland Line by the Dargaville Branch in 1940. The Donnelly's Crossing Section closed in 1959, but the Dargaville Branch continues to operate today as a freight-only line, though its future is less than certain.

The area around Dargaville is now predominantly a farming region and supports extensive dairy, beef, and sheep farms, as well as a thriving plantation forest industry.

Other attractions are the Kai Iwi lakes some 25 kilometres north of the town, and Pouto Peninsula. Baylys Beach is the local beach, just 13 kilometres from the township, and offers over 90 kilometres of rugged west coast surf.

All content from Kiddle encyclopedia articles (including the article images and facts) can be freely used under Attribution-ShareAlike license, unless stated otherwise. Cite this article:
Dargaville Facts for Kids. Kiddle Encyclopedia.