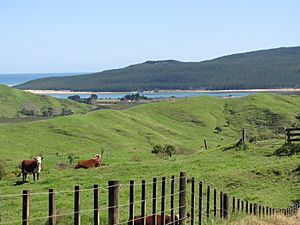 Glimpse of the harbour

Herekino is a locality in Northland, New Zealand. It lies 26 km south west of Kaitaia. The Herekino Harbour, also called the Herekino River, is an estuary and inlet from the Tasman Sea to the west. The Herekino Forest, which contains a stand of large kauri, is to the north, and the Tauroa Peninsula lies to the north west.

The harbour is mostly above water at high tide, with just a shallow entrance channel. The upper reaches of the harbour contain a mangrove forest. The township of Herekino is at the north east end of the estuary, and the small settlement of Owhata lies on the rocky south shore of the harbour entrance. Owhata is a flat grassy area, with a fairly shallow beach of mud and sand. There is not much natural shelter, and there is a limited supply of fresh water in summer.

Herekino was named by the Māori chief Tohe, who passed through on the way to visit the local chief Taunaha at Owhata and noticed a lasso-type of bird trap which had been incorrectly tied, which would cause the prey unnecessary suffering. He named the area Herekino-a-Taunaha (the false knot of Taunaha).

Ngāti Ruānui (now Te Aupōuri) dominated the Herekino and Whangape harbours and several battles were fought against other iwi in the area before European settlement.

In 1846, the brig H.M.S. Osprey mistook the Herekino Heads with the entrance to the Hokianga, about 30 km to the south, due to misty weather and the similarity of the two features - both have a northern head formed by sand dunes. The Osprey was driven ashore on the shallow sand bank just north of the headland. No lives were lost. Wreckage is still visible. Herekino was named on some charts as "False Hokianga" due to the similarity of the entrances.

Dalmatian immigrants were growing grapes in Herekino by the late 1890s and by 1906, there were 14 vineyards.

In the mid 1960s Herekino was a small township with shops - a butcher, a petrol station and more. However following the sealing of State Highway 1 through the Mangamuka Gorge to Kaitaia, the township quickly declined.

All content from Kiddle encyclopedia articles (including the article images and facts) can be freely used under Attribution-ShareAlike license, unless stated otherwise. Cite this article:
Herekino Facts for Kids. Kiddle Encyclopedia.