Government of Oregon facts for kids

Kids Encyclopedia Facts
This page is about the government of Oregon. For the state of Oregon, see Oregon. 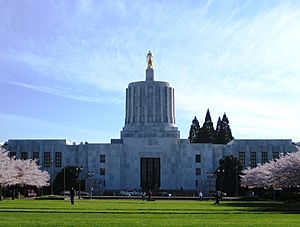 Oregon also has a system of commissions, wherein private citizens are appointed by the governor and confirmed by the Senate; these commissions have the authority to hire and fire the heads of the agencies they govern, and must confirm changes to the permanent rules governing those agencies.

In 1857, leaders of the Oregon Territory gathered at the Oregon Constitutional Convention and drafted a constitution for Oregon. On November 9, 1857, Oregon voters approved its first constitution that then became effective upon statehood on February 14, 1859. The constitution was unchanged for the remainder of the 19th century, but has been amended numerous times since 1902. The changes include the introduction of a direct legislation system, which enabled numerous popular decisions via initiative, both to the constitution and to the Oregon Revised Statutes.

The current document contains eighteen sections, beginning with a bill of rights. Oregon’s bill of rights contains most of the rights and privileges granted in the United States Bill of Rights and the main text of the United States Constitution. The remainder of the Oregon Constitution outlines the divisions of power within the state government, times of elections, designating the state capitol, the state boundaries. The original implementation provisions included a vote excluding African-Americans from the state.

All content from Kiddle encyclopedia articles (including the article images and facts) can be freely used under Attribution-ShareAlike license, unless stated otherwise. Cite this article:
Government of Oregon Facts for Kids. Kiddle Encyclopedia.