Kids Encyclopedia Facts
Not to be confused with The Dalles, Oregon.

Dallas is a city and the county seat of Polk County, Oregon, United States. The population was 16,854 at the 2020 census.

Dallas is along Rickreall Creek, about 15 miles (24 km) west of Salem, at an elevation of 325 feet (99 m) above sea level. It is part of the Salem Metropolitan Statistical Area.

Dallas was settled in the 1840s on the north side of Rickreall Creek and was originally named "Cynthian" or "Cynthiana". A 1947 Itemizer-Observer article (quoted in 100 Years in Polk County: A Centennial Background) states: "[T]he town was called Cynthiana after Cynthiana, Ky., so named by Mrs. Thos. Lovelady." The History of Polk County Oregon, 1987, Page 12, states: "To Mrs. Thomas J. Lovelady was given the honor of naming the new settlement and she selected the name after her home town of Cynthiana, Kentucky."

Another source claims that the origin of the name may come from the name of Jesse Applegate's wife, Cynthia Ann. However, she lived in the Salt Creek area of northern Polk County and, according to the 1850 Federal Census, had already left Polk County by 1850.

Dallas post office was established in 1852. In 1856, the town was moved more than a mile south because of an inadequate supply of water.

Dallas was in competition with Independence to be the county seat and the citizens of Dallas raised $17,000 in order to have a branch of the narrow gauge railroad come to their town, thus securing the honor. The line was built from 1878–80. A more suitable name for a county seat was needed, and since George Mifflin Dallas was vice-president under James K. Polk, for whom the county was named, "Dallas" was a natural choice.

Louis Gerlinger, Sr. incorporated the Salem, Falls City and Western Railway Company late in October 1901 and announced plans to build a railroad from the Willamette River at Salem to the mouth of the Siletz River on the Oregon Coast, a distance of 65 miles (105 km).

In 1902, Louis's son George T. Gerlinger organized a group of investors to build railroad lines in the area.

On May 29, 1903, the first train ran from Dallas to Falls City. At the end of June, passenger trains began regularly scheduled trips to and from Dallas and Falls City each day; the 9-mile (14 km), 40-minute, one-way trip cost 35 cents.

In March 2002, Willamette Industries was officially acquired by Weyerhaeuser Company in a hostile takeover. In early 2009, Weyerhaeuser's Mill formally closed down its Dallas operation. 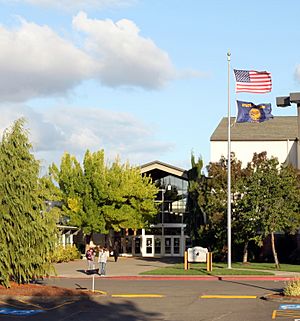 Dallas' only hospital is West Valley Hospital. Oregon Route 223 is the only state highway that serves the city.

All content from Kiddle encyclopedia articles (including the article images and facts) can be freely used under Attribution-ShareAlike license, unless stated otherwise. Cite this article:
Dallas, Oregon Facts for Kids. Kiddle Encyclopedia.